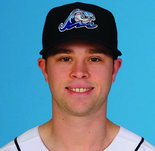 As a former second baseman myself, while watching games and following my teams, these are the players I usually keep an eye on. I’ve been following the West Michigan Whitecaps for some years now, and have seen the likes of Will Rhymes, Scott Sizemore, Justin Henry, and Brandon Douglas patrol the infield at Fifth Third Ballpark before moving up through the Tigers farm system. This season Mike Gosse has earned his spot at second base on the Whitecaps roster. Though he did play a significant number of games for the ‘Caps last season, Douglas was the main second baseman.

Gosse is off to a good start this season, however, being named the Whitecaps Player of the Week. In the first nine games he’s hit .323 with five doubles and one triple. He has yet to commit an error and has a .548 slugging percentage with three RBI’s.

This is what he told the Grand Rapids Press about his recent play: “I’m trying to be as unselfish as I can. Trying to move runners over, and trying to get guys in so we can get wins. This early, it’s never about yourself. It’s always about trying to win and I think we’re on a good road right now.”

Whitecaps manager Joe DePastino agrees: “He’s had a lot of big hits for us, and not only hits. When I need a runner moved over or bunted over, he gets the job done. He’s had some timely hitting and driven in some big runs for us.”

The 23-year-old Oklahoma alumni was born in California, but raised in British Columbia, Canada. I’m used to seeing city names like Medicine Hat, Moose Jaw, and Red Deer on the hockey rosters I follow, but it’s a rarity on a baseball roster. Not too bad for a kid who grew up watching Hockey Night In Canada and eating Kraft Dinner, eh?