Anyone thinking that being a grounds keeper at a professional ball park is an easy task, think again. After a freak snow storm dumped over three inches on Fifth Third Ball Park on Monday, first year head groundskeeper Adam Ferrell and his crew took action. Actually, more than 20 staff members, including front office personnel, the grounds keepers, and salesman all chipped in to remove the snow. It was a three hour process, with snow ball fights, snowmen, and Christmas music keeping the mood light. Even a Christmas tree was placed on the Whitecaps dugout.

Ferrell told the Grand Rapids Press: “I was a little nervous when I first woke up and it was coming down good, but we got some manpower behind it and everybody chipped in. We removed the snow off the tarp, flipped it over, and let Mother Nature do her thing. It melted by 3 p.m.”

With eleven forign-born players on the West Michigan roster, some were seeing this type of weather for the first time. Outfielder Luis Castillo from Panama and Clemente Mendoza from Venezuela are two of them.

“I was like, oh my God,” Castillo told the Press. “This was the first that I’ve seen this and couldn’t believe it.”

Mendoza chimed in, “It’s really depressing, and nobody from the Latin countries have seen this before. I didn’t think we would be playing baseball, I thought they would cancel the game because of the snow on the field.”

Ferrell, an intern with the Whitecaps in 2008, though, was up to the task. He worked under Heather Nobozny and the Detroit Tigers in 2009, and was head groundskeeper for the Spokane Indians of the Northwest League last season. He was named the NWL Sports Turf Manager of the Year for 2010. 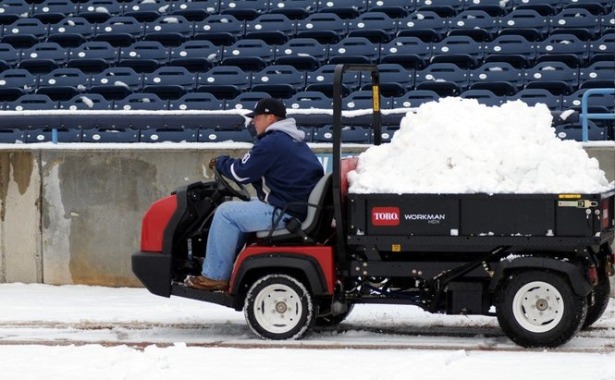 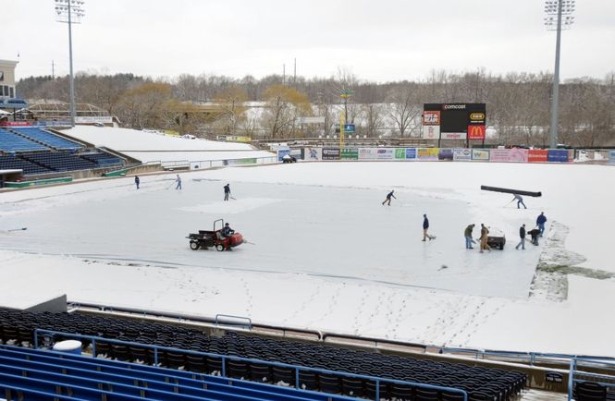 The ‘Caps were able to play Monday’s game, but were rained out Tuesday night. They were able to beat the Fort Wayne TicCaps by the score of 7-3, much due to the return of designated hitter Billy Nowlin. Nowlin drove in four runs including a two-run homer to lead the way for West Michigan. After being hit in the head and sustaining a concussion in spring training, he was just activated from the DL on April 14. In his four game so far this season, he’s hitting .400 with two home runs and six RBI’s. Nowlin was a Midwest League All-Star in 2009, and split last season between High-A Lakeland and Double-A Erie.

“I’m just going to keep going out and playing hard, playing with my team here and see what happens,” Nowlin told the Press. “It’s always nice coming back to a place where you already know the ins and outs and stuff like that. Being familiar with a place is always a good thing.”

Manager Ernie Young seems happy to have Nowlin on the roster as well, “He swung the bat very well tonight. Billy being here is definately a good thing because it solidifies the middle of the order.”

Catcher Rob Brantly also drove in two runs in the game, and Hernan Perez scored three runs. On this hill, Jeff Ferrell picked up his first win of the season. 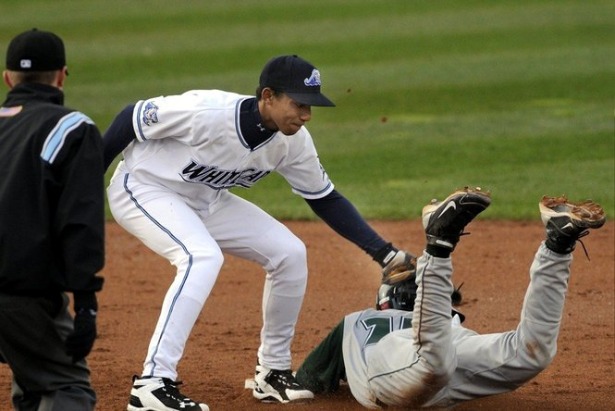 Wow, that’s a lot of snow! If Seth and I had these guys with us, we might have actually made it inside my inlaws’ cabin the other weekend, he he. The Christmas tree is a nice touch – style points. Great pictures too. I’m partial to plays at second – they bring back fond memories. 🙂
Kristen
This is a very simple game…

Snow? Yeesh! I was complaining because it was only 40 degrees up here! Guess Connecticut is the farthest North I can handle.
Catherine
http://chisoxblog.mlblogs.com/

What awesome pics! And yes, I am impressed by that removal. I remember in high school, we players had to do a lot of the groundskeeping and I thought that was harder than hitting curveballs.
–Jeff
http://redstatebluestate.mlblogs.com/

HEY! Its one thing to write a great story, its a whole other thing to expose your audience to pictures of the white stuff after April fools day. You are a sadist! Seriously though, yah those guys are woefully overworked at times. I saw something on Netflix not long ago, a documentary about the grounds crew at Fenway. Very entertaining.
Jon

Kristen-Would have been cool for the Christmas tree to be decorated. Maybe the grouds crew is for hire?
Catherine-40 degrees is shorts/t-shirt weather up here….
Jeff-I agree, these guys do gots skills…
Jon-It’s nice to know they can get the job done when they need to.
Thanks for checking in..
–Mike