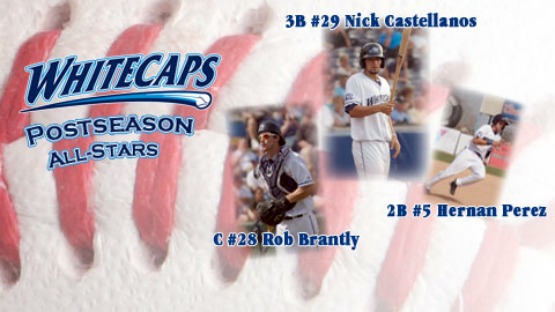 Third baseman Nick Castellanos, second baseball Hernan Perez, and catcher Robert Brantley have been named to the 2011 Midwest League All-Star team for the post season. Castellanos had a slow start to his first full pro season, but became one of the best players in the league though-out the course of the season. The nineteen year-old is fourth in the league with a .310 batting average, a team leading 71 RBI’s, and six home-runs. Castellanos is leading the league in hits with 147 (the ‘Caps record is 158 set by Robert Fick in 1997) and is tied for the league lead in doubles with 34. He’s solid in the clutch, also, batting a whopping .398 with runners in scoring position.

The twenty year-old Perez, from Venenzuela, returned from the Whitecaps last season to become the starting second baseman in 2011. He played shortstop for the ‘Caps last year, and has made some great plays on the infield at Fifth-Third Ballpark. This season he’s hitting .267 with eight home-runs and 40 RBI’s. He leads West Michigan with 67 runs and 22 doubles. He represented the ‘Caps at this seasons All-Star Game also.

Despite being promoted to Lakeland last month, Brantly has been honored as the top catcher in the MWL. He hit .303 with seven home-runs, and 44 RBI’s, and had 16 doubles. Behind the plate he threw out 34% of the runners trying to steal against him. I’m glad we had a chance to watch these guys plays this season, and look forward to following them up through the Tigers system.

Burgos MWL Pitcher of the Week

Whitecaps hurler Alex Burgos has also been named the Midwest League Pitcher of the Week for August 22-28. The left-hander threw eight scoreless innings last Thursday against the Lake County Captains, helping his team to a 12-innings 1-0 victory. Since joining the Whitecaps in June, Burgos has gone 6-4 with a 2.20 ERA in 14 starts. He’s struck out 82, while only giving up 55 hits this season, and has allowed opposing batters to only hit .190 against him. Burgos is the second West Michigan hurler to win the award this season, joining Kyle Ryan from July. We were lucky to see Alex pitch the Whitecaps to victory on Star Wars night on July 9.

Photos courtesy of the West Michigan Whitecaps and M.I.B.