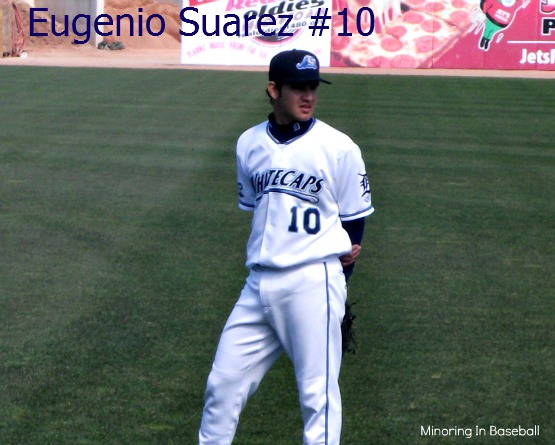 So far in this second half of the Minor League season, the West Michigan Whitecaps are certainly treading water. The good news, is that the Whitecaps are currently in second place in the Midwest League‘s Eastern Division. The bad news, is that they are tied with Great Lakes, Lake County, and South Bend for that spot. Each with an identical 15-14 record. More good news, is that they are only three games out of first place. More bad news, is that there are three teams in first place, all with identical 18-11 records. So, I say that they’re treading water is fairly accurate. Helping the Whitecaps this second half is infielder Eugenio Suarez. On July 19th, Suarez turned his 21st birthday into one he’ll never forget. He went 4-4 with four RBI’s, including a two-run home run, and reached base in all of his six plate appearances. To top that all off, he came through with a walk-off single with two outs in the bottom of the 10th inning, as the ‘Caps rallied from behind to beat the Peoria Chiefs 9-8.  He lined a 2-2 pitch into left field for the win, and was mobbed by his teammates for his efforts.

“I’m so happy because I dedicated this game to my father,” Suarez told MLive.com. “I told my father I was going to have a good game for my family, and I did. I’m so happy and excited because we never gave up and kept working and fighting for this game.”

He’s also been getting the job done in the infield, too. On the 21st, in a close game with the Burlington Bees, Suarez made 11 assists in the field. One of his assists was a throw to the plate that caught a Burlington player trying to steal home in the seventh inning, and that kept his team in the lead. In the third inning, he assisted on all three outs. The Whitecaps won the game 5-0, but it was very close (1-0) until they opened up the offense in the eighth inning.

“That is the first time in my life that I’ve had 11 assists in a game,” he stated. “I like a game like that, I feel excited when I can help the team win with defense.”

We ‘Caps fans like it, too, Eugenio! The team will have to keep playing tough, and starting winning more of these close games (they lost 1-0 last night…grrrr…) if they plan on playing in the post season. And with the teams so evening matched, every game will certainly count.