We had a lot of fun moments this last year, and here are the best of them. It’s always hard to narrow it down to just nine, but the top few were really special and it’s fun to look back and think of the smiles on the kids faces in most of these. It’s also hard to find an order, or to really think that one’s childs’ moment meant more than an other. Read and enjoy, and I honestly hope that everyone had as much fun this past season as we did.

With the kids participating in the Sault Area Little League and me coaching, we were able to be in the local Independence Day Parade. The kids had fun being seen by their friends, but really didn’t like the fact that they were throwing candy to the crowd instead of eating it. Riding on the float was fun, but it was literally a pain in the a$$ for me, as I tried to keep out of the public eye, and make sure no kids jumped off. It was good to have Trevor back in baseball and this was Brian’s first year. Lily played in the Sault Girls Softball League, but was able to march anyway because she was helping me coach Brian’s team. 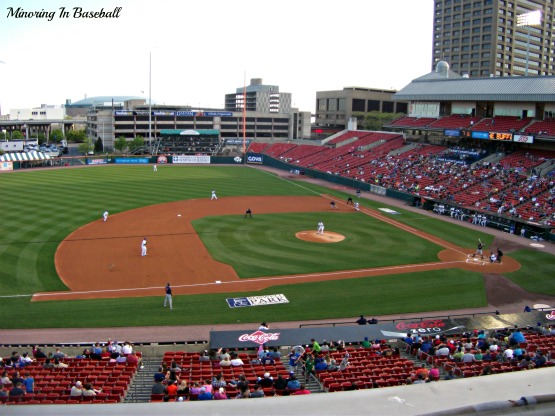 Seeing the Buffalo Bisons is a great Minor League Baseball experience. I saw my first game there back in the ’90’s as my first minor league game. It was really good to be back and that my dad could experience this with me. Coca-Cola Field is a great place to watch a game and one of the best we’ve ever been to. Another first for me, was meeting felling bloggers Danny and Quinn from nybisons. They had a party night going on, too, with live music and I did drink a beer or two. I highly recommend hitting a game in Buffalo if anyone is in that area.

Nothing like starting the season out on a high note. In Lily’s first game of the season, she went 6-6 in helping her team on to victory. Although she never repeated this feat, she did have multiple hit games though out the season. It was a brutal summer for these girls, as the temp was in the 90’s many times for their games. They played during the heat of the day, too, as the boys played in the evening so the heat wasn’t as bad for them. Lily had a great season, though, and this first game is something she can really be proud of herself for, as we’re proud of her! She played just about every position, but like her brother really liked playing catcher.

In July we headed down to Dow Diamond, home of the Great Lakes Loons, to see them take on he Whitecaps. This was the kids’ first trip to Midland and they were really impressed. Dow Diamond is a really nice stadium, and the playground there was a big hit. They did a lot of playing and were happy to meet Louie the Loon, the Great Lakes mascot. They also had a camel mascot, but I’m not sure what that was all about. The kids had so much fun I promised to take them again next season, no matter who the Loons are playing. 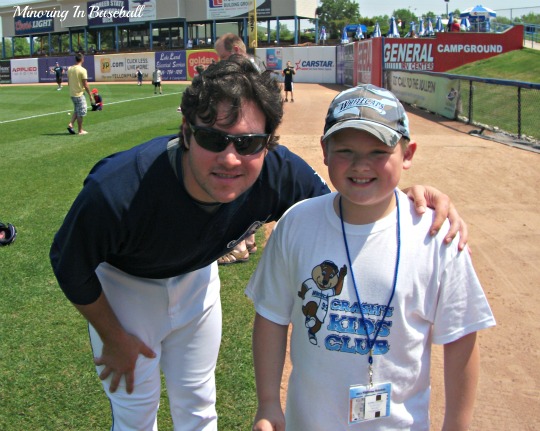 Trevor with Patrick Leyland. Both are catchers, and both have dads who are great baseball coaches.

With Trevor donning the tools and working behind the plate this season, it’s no surprise that he took a liking to the Whitecaps catcher Pat Leyland. Throw in the fact that Leyland’s dad manages the Detroit Tigers, and you have a winning combination. On Sundays at the Whitecaps games, fans are invited onto the field for autographs and to play catch. We really had to seek out Leyland, though, as he was preparing his pitcher for the game. He was nice enough to take the time for a quick picture, and this really made Trevor’s day. This is how we build baseball fans, from childhood moments like this. 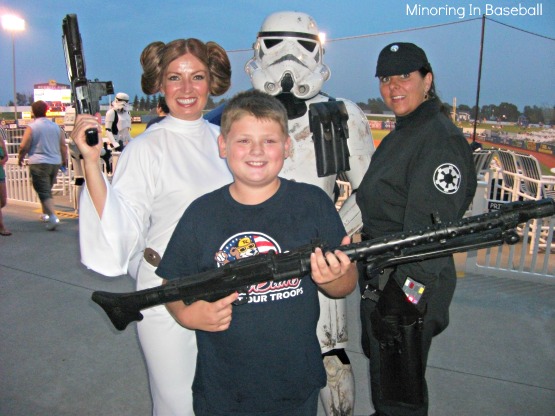 This is one of the highlights of our summer every year. This season we decided to check out Star Wars Night at the Traverse City Beach Bums instead of the Whitecaps. They didn’t have as many of the characters around the ballpark, but the kids really had a good time anyway. They really like the Beach Bums games, as the atmosphere is really laid back. They like the playground there, too, and it’s not as crowded as some of the other ballparks we go to. They got to meet some of their movie favorites, though, like Darth Vader and Princess Leia. Thank goodness they didn’t have any from the prequels crap. I’m sure this event will be on next years list, too.

Our first ballgame of the season was a memorable one. Brian was able to participate in the ‘Crash Dash’, where he raced the ‘Caps mascot Crash around the bases. Brian won, of course, because of this blazing speed, and that Crash usually gets distracted by something on third base. It was cool to see us up on the video board, too. Brian was smiling away, as he loves to win races, and Crash is his favorite mascot. I would love to see him do this next season if he can.

#2-The road to Cooperstown

The National Baseball Hall of Fame was one of the top things on my baseball bucket list (don’t worry, that prime 9 will be posted next month…). Although I admit it was a little disappointing, we still were able to see some breathtaking memorabilia from baseball’s past. Seeing some of the greats enshrined in the Hall is an experience that every baseball fan should take in. This was also something my dad really needed to see and I’m glad I was able to see this with him. We also had a chance to check out Doubleday Field, although there were no games going on that day.

#1-Rookie of the Year

This season Brian made his organized baseball debut…and took one more step toward destiny. He seems to like baseball more than any other sport so far and is really showing flashes of talent. I’m glad they lowered the starting age to four, as he was really ready to play. The problem is that he loves to hit live pitching, so hitting off a tee isn’t the biggest thrill for him, but he still does it well. The biggest thing he has to learn is team work and being a good team-mate. Being the youngest child, he’s spoiled rotten, and he has to get over himself on the field. Lily helped me coach his team and she did a great job with all of the kids, and I think it was positive for Brian, too. Trevor helped out when he could, but was busy with his own team (I was an assistant for Trevor’s team). Seeing your child take the field for the first time is so special, and if I was doing this list a few years ago, then Lily and Trevor would be #1 also.