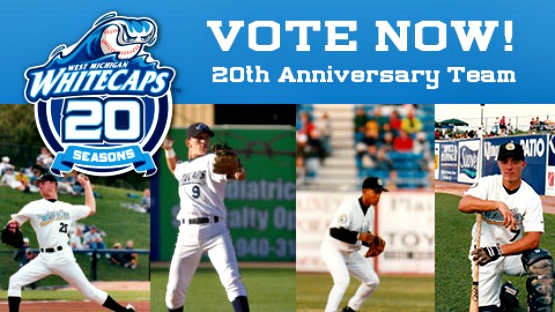 The West Michigan Whitecaps are competing in their 20th season in the Midwest League. To celebrate this event, the team is having the fans vote on the best players they’ve seen in each position for the last two decades. Even three managers are up for the vote, in Bruce Fields, Matt Walbeck, and Tom Brookens. All three won the Midwest League Championship in West Michigan. Catchers such as Brandon Inge, current Tiger Alex Avila, and Miami Marlin Rob Brantley are all up for the best behind the plate. At first base, I think that Robert Fick has the inside edge. He was voted into the first Whitecaps Hall of Fame, and has the honor of hitting the last home run in Tiger Stadium. That’s just my vote, though. Second base is my favorite position, so I’ve followed the players there pretty closely. It will be tough for me to choose only one of my favorites such as Scott Sizemore, Justin Henry, and Brandon Douglas. At short stop, in my opinion, the vote might come down to current Tiger Ramon Santiago, or last’s years MiLB Gold Glove winner Eugenio Suarez, which is a tough call. At the hot corner, top prospect Nick Castellanos may be the favorite despite being moved to the outfield last season with Lakeland and Erie. He may get a push from guys like Wade Gaynor and Wilkin Ramirez, though. Fans are allowed three choices for outfielders, and there are plenty. While players like Matt Joyce, Cameron Maybin, Cody Ross, and Brent Clevlen have all seen action at the MLB level, Gorkys Hernandez had a great season in West Michigan in 2007. He was also named the Tigers Minor League Player of the Year that year. Fans are also allowed to vote for three pitchers. Players like Andy Van Hekken, Casey Crosby, Duane Below, and Joel Zumaya all found success on the hill in West Michigan. Rounding out the relief pitchers, fans can vote for two, including Michael Torrealba and Anthony Claggett. This is another great way the Whitecaps are celebrating so much success the last 20 years. VOTE NOW!