On Friday Kalamazoo Baseball introduced their new team name and logo. The new team entering the Northwoods League will be dubbed the Kalamazoo Growlers. The team will play in 2014 at Homer Stryker Field, who last hosted the Kalamazoo Kings of the Frontier League. The manager for the new team will be Joe Carbone, who is the second most winning coach in the Mid American Conference history at Ohio University. He is a two-time MAC Coach of the Year, and was the Midwest Region Coach of the Year in 1997. The Growlers have also two players from Western Michigan University lined up for next season, also, in catcher Brent Sunde and outfielder Jared Kujawa. Although I spent my childhood watching minor league hockey in Kalamazoo with the K-Wings, I look forward to seeing the Growlers play ball. Kalamazoo also has a great history of baseball, as the first College World Series was played there, also. They’ll have a good rivalry with the Battle Creek Bombers just to the east. I still think that if these two communities would have worked together, there could still be an affiliated minor league program located just between the two cities. 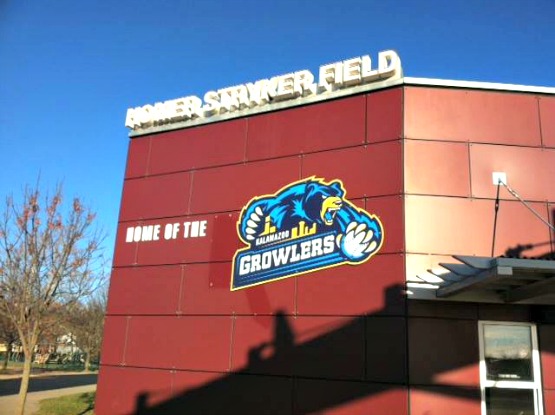 Photos courtesy of the Kalamazoo Growlers