While down on Lansing, the Lugnut staff is going over the future plans for their ballpark, in West Michigan they’re just focusing on getting Fifth Third Ballpark ready for Opening Day. When that day comes on April 8, the Whitecaps will use the third-base dugout and locker room while they wait for theirs on the first-base side to be completed. The visiting teams will be using a temporary trailer just outside the center field gate, as will the umpires. The new locker room and clubhouse facilities are expected to be completed by May 1, in time for the ‘Caps home stand on the 5th. The temporary visitor clubhouse will only affect two home series, and four opponents in Wisconsin, Beloit, Bowling Green, and Fort Wayne.

“I know it’s going to be a bit of a change,” stated Whitecaps Vice President Jim Jarecki to MLive.com. “But cooperation from them (the opposing teams) has been very good. These guys may be prepping a bit and going back and showering at their hotel, but, for the interim, that’s the best setup we can do. Hopefully, it’s for a short period of time and we’ll put it behind us.”

The Whitecaps still expect to have the first-base side enclosed with concessions stand and restrooms ready to go. The re-building of the suites will be ongoing, but the smoke damaged ones on the third-base side will be ready to use. The effort by all involved has to be the weather we’ve been hampered with here in Michigan. This is one of the coldest winters in recent memory, and only two cities in the country (Buffalo and Erie) received more snowfall this year. The organization is still push to be ready by the home opener, and grounds crews will be removing over a foot of snow off the field in the coming week.

“We’re usually starting work on the field at this time,” Jaracki stated. “But you just can’t take off all the snow and go. You (remove it from) the warning tracks, then the infield skin. The grass will take care of itself, but the biggest focus will be on the infield skin and the mound and the home plate area. That has to get dried out.”

There’s no doubt that the ballpark will be ready by opening day, in my opinion. I know this organization will be striving to meet all of their goals. We plan on being in the stands on April 12, and for the Midwest League All-Star Game in June. 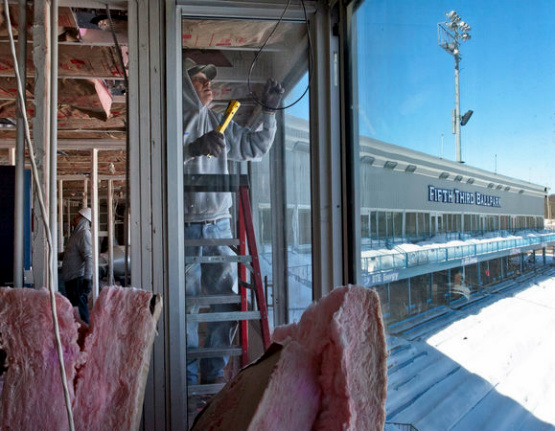