Louisville Slugger Field-Louisville, KY:  It’s that time of the year again, and a change in venue couldn’t keep me from taking my scruffy-looking nerf-herders to Star Wars night.  This year is our first here in Louisville, and they put on a pretty good show for the kids.  Due to an accident on the freeway, we got to the game about a half hour late, so Brian missed out on his free light-saber (not that he doesn’t have an arsenal of them at home..).  But, the weather was perfect, and my friend Darryl visiting from Ohio got us great seats behind the first base dugout.  They had the Star Wars characters on the field before the game, and throwing out some first pitches.

We watched a few innings of the game, which turned out to be a pitchers duel, sort of… Chad Rogers got the start for the Bats, and he ended up pitching four shut-out innings.  He gave up only five hits on the night, while walking two, and striking out three.

When the Star Wars characters started making their way to the concourse, the boys and I decided to join them.  First of all, Brian was really happy just to finally meet the Bat’s mascot, Buddy Bat! 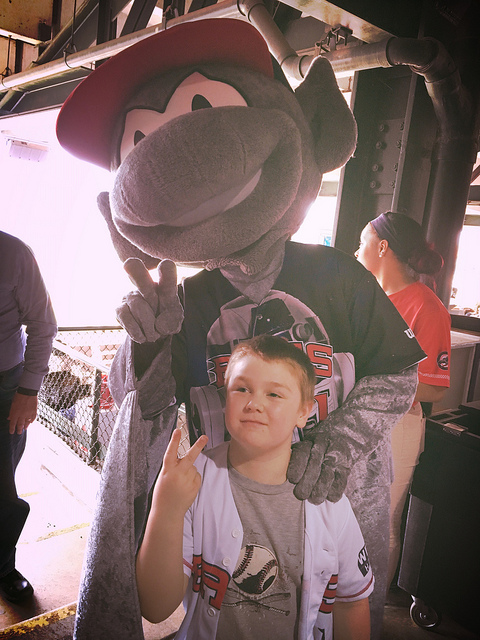 We then were able to see some of the Star Wars guys, with Brian getting in with an Imperial Speeder Bike Trooper, and Trevor and I were happy to see Boba Fett, who is our favorite and we missed him last year.

Back to the game. A 0-0 tie doesn’t sound all that exciting, but this was a great game to watch.  Both teams had runners in scoring position multiple times without being able to push a run home.  Louisville actually had the bases loaded with no outs in the sixth, and were unable to score.  Pair that with a gorgeous night for baseball, and we didn’t mind at all going into extra innings!  The game finally came to an end in the 11th, when Seth Mejias-Brean smacked a two-run homer to win the game and send the crowd home happy.  Relief pitcher Wandy Peralta picked up his first win of the season, and Kyle Waldrop added a pair of doubles in the game. FINAL: Louisville 2, Clippers 0, 11 innings.

This game was as much fun at a ballgame that I’ve had in some time.  It was a great time spent with the boys and my best friend, and it’s always good to be surrounded by other knowledgeable baseball fans.  If the weather could be like this every game, I would be more than happy.  I’m sure we’ll be making another trip to Louisville Slugger Field, too, and to some other teams in the area.  I did remember to take a quick video, too, hoping the Bats would win it in the ninth.

Video and photos property of Minoring in Baseball