Louisville Slugger Field-Louisville, KY:  The Louisville Bats had a great idea to wrap up the 2017 for their fans, hosting a movie night at the ballpark.  Sitting in the stands or laying out on a blanket on the field with a movie up on the video boards is definitely a promotions most fans were excited about.  The only thing that wasn’t exciting, was the movie selection the Bats posted on Facebook that fans could vote on.  I honestly can’t even remember every movie listed, but I voted for the ‘Lego Batman Movie’, while the new ‘Beauty and the Beast’ was the big winner out of the four.  I was a little confused why no baseball related movie was listed, especially ‘The Sandlot’, which I thought would be a runaway winner as far as family baseball flicks go.  In fact, there was so much outcry to show ‘The Sandlot’ by myself and other fans, the Bats replied on Facebook stating that wasn’t a movie that they had the rights to show.

In all honesty, however, it really didn’t matter what movie they showed.  Brian was able to bring a friend to the event, and we laid some blankets and pillows out to enjoy the show.  For me, I was just happy to be on the field, and was more intrigued by how perfect the grass was than anything else.   I went to buy the kids some popcorn and pop, and was really pleasantly surprised at the great turnout for the event.

The kids also had a chance to play on the park and ride the carousel. 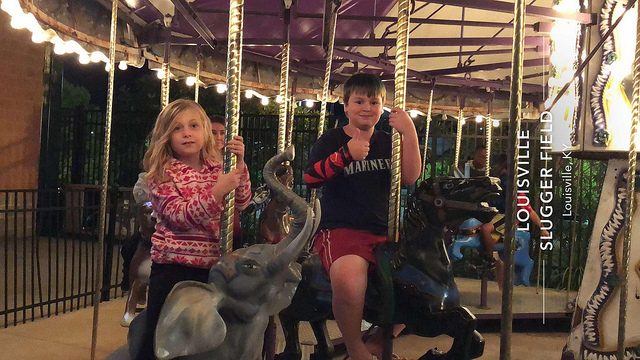 This turned out to be a really fun event, and the movie wasn’t all that bad, I guess, but the kids enjoyed it and that’s what counts.  I think in all there was a lot of positive feedback from the fans, so I’m confident the Bats will hold more of these events. Maybe ‘The Sandlot’ next time, though…. What family baseball movie would you all like to see on the big screen at a ballpark?  Poll is below!

Promotion courtesy of the Louisville Bats