Great American Ballpark-Cincinnati, OH:  Oh, Labor Day.  When most people are smart enough to take a day off and relax, we decided to head up to the Queen City for some Reds baseball.  As usual, we parked in Newport and took the boat over to the ballpark.  Since the boat always drops us off at the back of the park (duh, like, it can’t travel down the street and around the corner…), Trevor and I decided to walk around and check out the façade.  I took a photo of some of the statues featured out front, such as the greatest catcher ever Johnny Bench and ‘Charlie Hustle’ himself, Pete Rose.  The Rose statue is new to the ballpark this season. 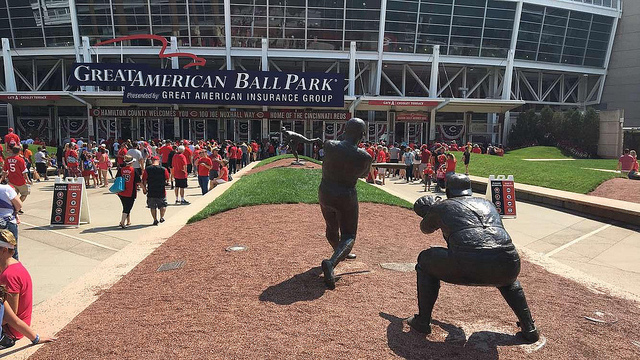 I thought we had great seats again, in the bleachers, but the front row which gave us a great view of the field. 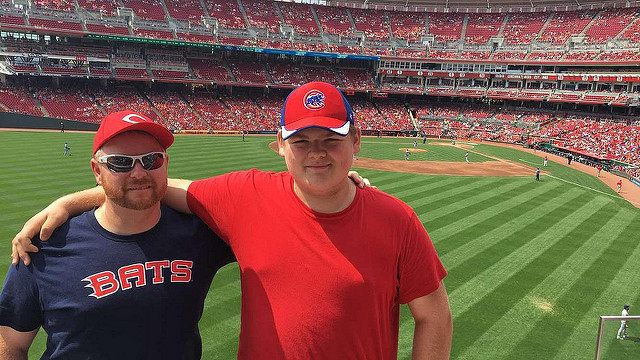 The game started a little slow, and the Reds finally took a 1-0 when Joey Votto took a walk in the third inning to drive in a run.  Not very exciting, I know, but a run is a run. 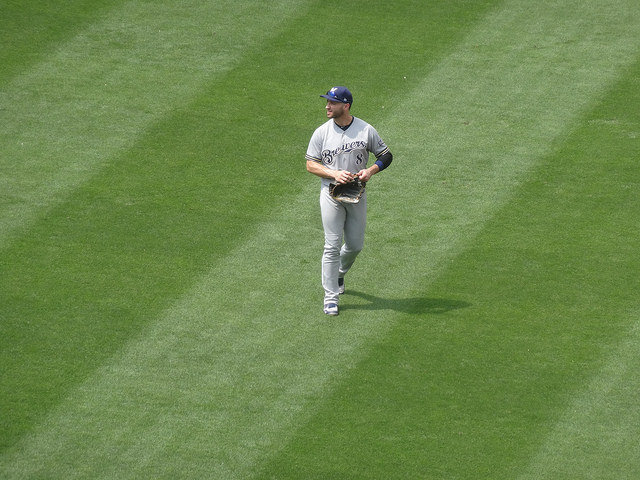 Trevor wasn’t happy in the hot sun, so we found some seats with some shade, and a little closer to the action.  The Reds scored another run in the 6th, when Eugenio Suarez earned a walk.  Yeah, I know.  Yawn.  But then Tucker Barnhart hit a double that plated two, so business was picking up.  The Reds were up 4-0, and I was feeling pretty good about the game.

The Brewers came storming back top of the seventh, however.  Homer Bailey got the start for the Reds, and he pitched a solid six innings, giving up three runs and striking out four.  A pair of home runs tied the game at four going into the late innings. 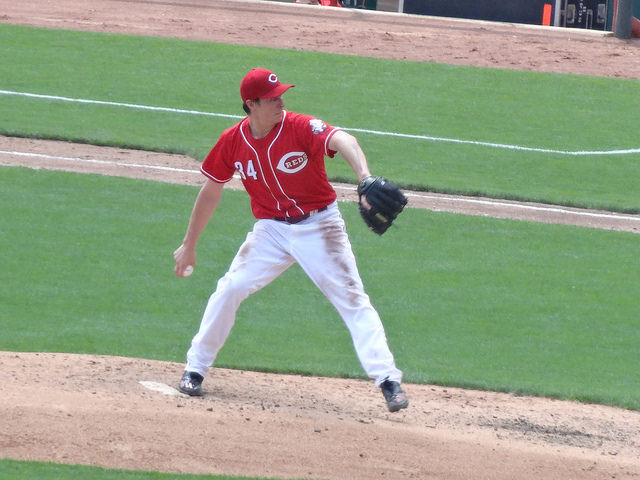 Still tied at four bottom nine, it was hero time for Billy Hamilton.  He hit his first right-handed home run of the season to set off the fireworks and give the Reds the win!  Relief pitcher Raisel Iglesias got the win for Cincy.  This was a great way to spend Labor Day, even though I only got a half-hour nap in before working all night.  It was worth it for a fun day of baseball with Trevor.  FINAL: Reds 5, Brewers 4. 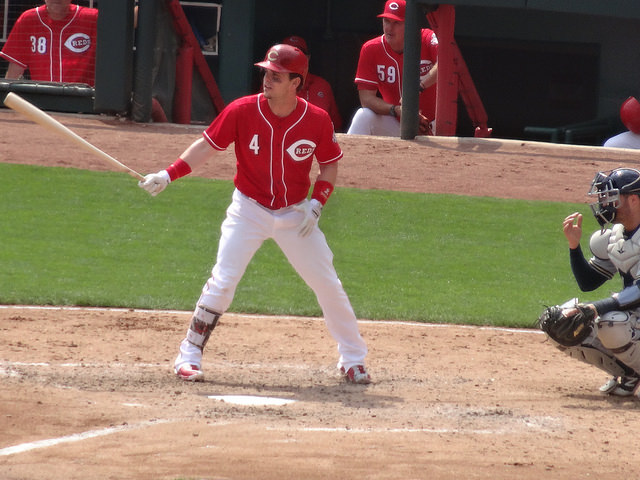 Great American Ballpark-Cincinnati, OH:  What a day for fans of Pete Rose!  And what a weekend, for that matter.  We were lucky enough to be in attendance when the Reds retired Pete Rose’s #14 on Sunday.   It was a hot day, but worth to be in the presence of some of the greatest players in history, including Rose, Johnny Bench, Joe Morgan, Tony Perez, and Barry Larkin.  His induction into the Reds Hall of Fame, and his jersey retirement were a long time coming, so the crowd was pretty hot for Pete, also.  Rose gave a great speech, and was very humble, and thankful to his teammates, manager Sparky Anderson, and especially to the fans.  Here is the video I took of his speech:

Here are some more photos of the ceremony.  The Hit King looks calm and cool as always, even in the 95 degree heat!  I like the one where he’s about to give Bench a good bro-hug! 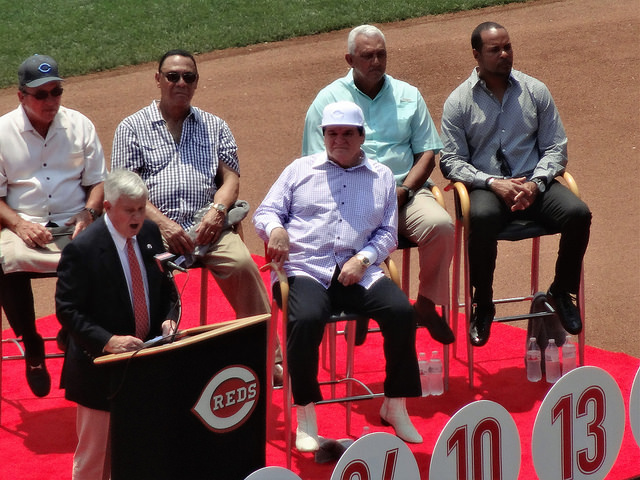 After the ceremony, the game got underway.  It was a good one for Reds starting pitcher Anthony DeSclafani.  He pitched eight scoreless innings, while scattering only five hits, and struck out five.  DeSclafani even knocked in a run to help his own cause!  Closer Tony Cingrani came into the game to close the door, and ensure Cincinnati’s first shut-out of the season. 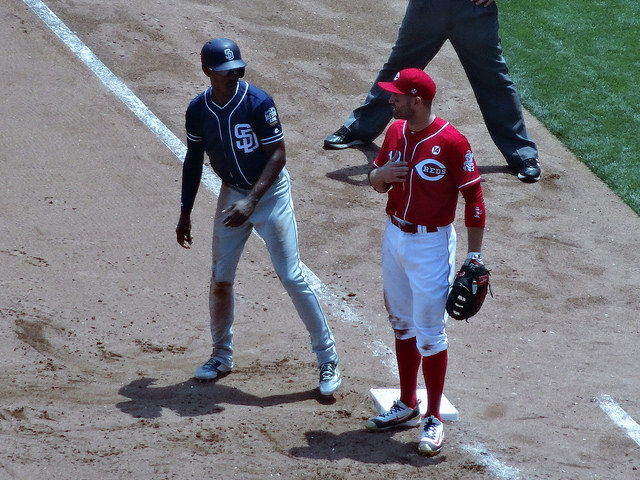 Another big winner of the day, was Mr. Redlegs during the mascot race:

The Reds were led offensively by Jose Peraza, who went 2-4 with a run scored and a stolen base.  Catcher Tucker Barnhart pitched in as well, going 2-3 with a walk and an RBI double.  Jay Bruce also added a solo home run in the win.  FINAL:  Reds 3, Padres 0. 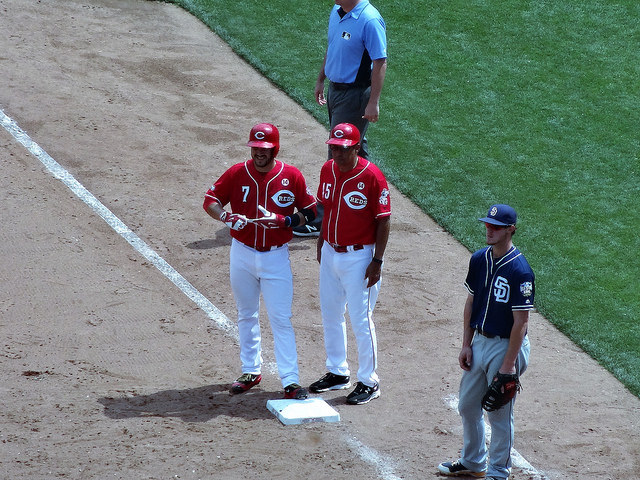 Despite the heat, it was a fun day at Great American Ballpark.  I’m glad I was there to witness Charlie Hustle’s  jersey retirement, and a rare Reds win.  I was only able to score tix for the upper level to this game, but made sure my buddy and I were in the first row, so I was able to get some decent photos.  On my way home, I went up and down the dial, but just couldn’t find WKRP on the radio…