Six must be a lucky number for the West Michigan Whitecaps this year, as first a half-dozen former players were got invites to the Tigers training camp. Now, six ‘Caps alumni will be playing in this season’s World Baseball Classic representing their respective countries. The latest player to sign on, is Warwick Saupold. He pitched for the Whitecaps last season and will be representing Australia. A relief pitcher, Saupold was 2-1 during his time in West Michigan, with a 2.79 ERA. He struck out 58 batters in 28 games. 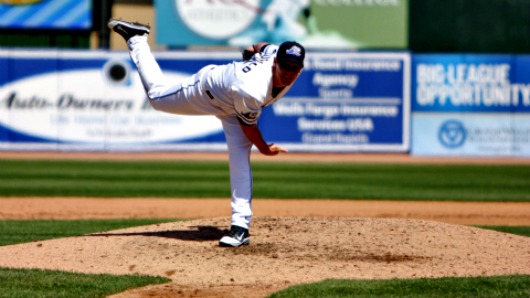 Warwick Saupold pitched for the Whitecaps last season, and will represent Australia in the WBC.

Representing Venezuela will be Ramon Hernandez. Hernandez played in West Michigan back in 1996, when they were affiliated with the Oakland A’s. He hit .255, with 12 home runs and 68 RBI’s. He’s been playing in the majors with Oakland, San Diego, Baltimore, Cincinnati, and Colorado.

Former Tigers’ closer Fernando Rodney will be playing for his home country of the Dominican Republic. He played for the Whitecaps way back in 2000, going 6-4 with a .294 ERA. In 22 games he had 56 strike-outs and only gave up two home runs. After leaving the Tigers, Rodney went on to pitch out of the bullpen for California/Anaheim/Los Angeles and Tampa Bay.

Representing the great maple leaf will be Chris Robinson for team Canada. Robinson was a catching prospect for the Tigers when he played in West Michigan in 2005, hitting .257, with eight doubles and two home runs. He’ll be in pursuit of base hits and cheap gasoline while playing in the WBC. He threw out 12 baserunners from behind the plate for the Whitecaps, too.

One of my favorite former Whitecaps, Jair Jurrjens, will be playing for the Netherlands. He was part of one of the worst trades in Tigers’ history, in my opinion, but needs to find his form back to be effective in the WBC. With West Michigan in 2005, he went 12-6 with a 3.41 ERA. He had a whopping 108 strike-outs in that season, also. He was traded to the Atlanta Braves in 2008, and I love to see him back in the Detroit system.

Giovanni Soto pitched 16 games for the Whitecaps before being traded to the Indians that same season. He went 6-6 with 2.61 ERA in West Michigan, while fanning 76 and pitching two shutouts. He would go on that season to win the Midwest League Championship with the Lake County Captains, and threw a no-no last season for Akron. He’ll be representing Puerto Rico in the WBC.