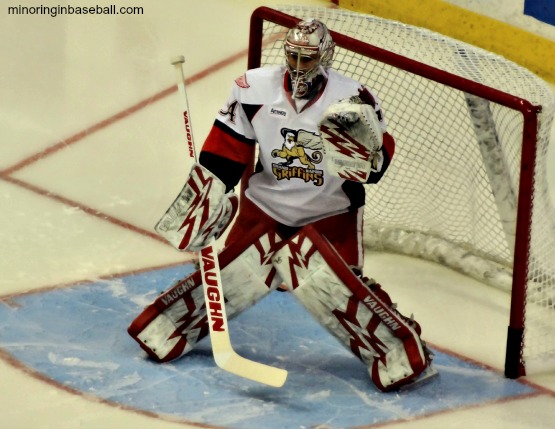 Van Andel Arena-Grand Rapids, MI: After a fun afternoon at the West Michigan Whitecaps’ Open House, and a great meal at Enza’s Pizza, we made out way to the Van Andel Arena for an evening of AHL hockey featuring the home town Griffins taking on San Antonio. The Griffins won the Calder Cup last season, and were out to their best start ever in 2013, but injuries to parent club the Detroit Red Wings have depleted the roster here in GR. The Griffins still have a lot of fight in them, though, and it was fun to finally make it down to a game this season. The kids really like Van Andel Arena, also, as it’s the biggest one they’ve had a chance to visit so far. They also had a free hockey figure promotion, and we all know how much kids love getting free stuff. Brian finally got to meet one of the Griffins’ mascots, so he was all his glory at that point.

Last year’s championship banner. This is what it’s all about. 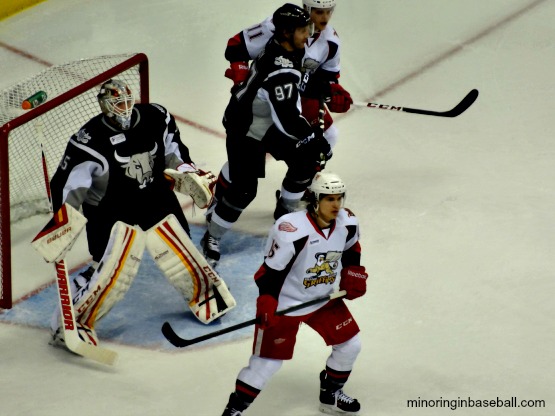 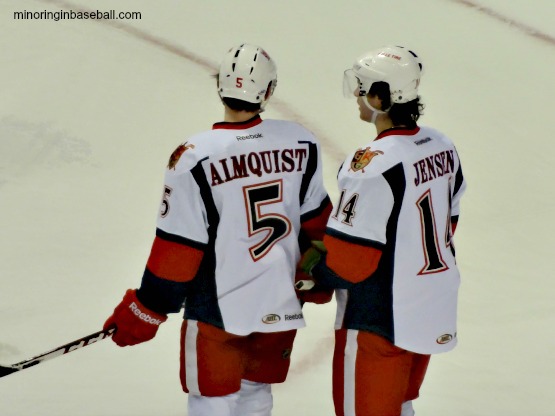 The game itself was a rough one for the hometown Griffins, as they got spanked 3-0 by San Antonio. They really just didn’t look like a typical Grand Rapids team, and made too many mistakes. The only stand out player was Petr Mrazek in net, who made 22 saves on the night, but was hung out to dry on the three Rampage goals. Head coach, and Sault Ste. Marie native, Jeff Blashill should have this team back to their winning ways by next weekend, though. The games are always a little more fun with a win like they did for us last season, but we still had a great time together. I’m not sure if we’ll make it down to another game this season, but if not we surely wish the Griffins luck on another championship run. Looking over the Whitecaps schedule, I was hoping to find a baseball/hockey double-header we could go to, but their games just don’t match up. All together, another day with the kids and my dad that I’m extremely thankful for. 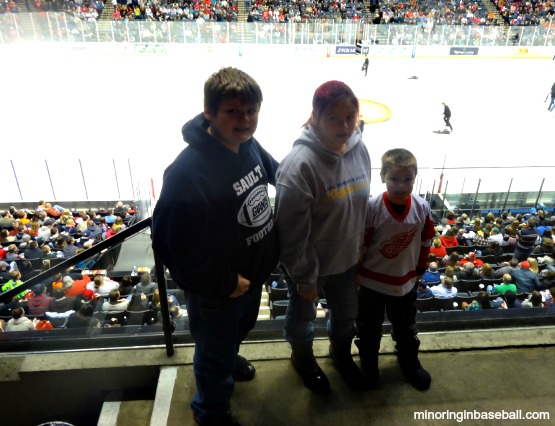 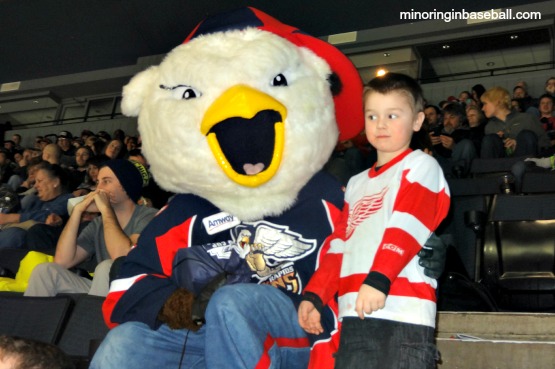 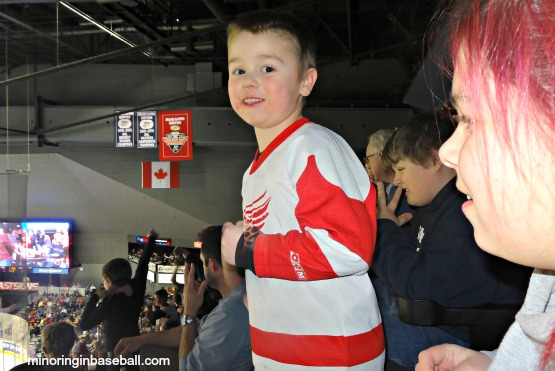 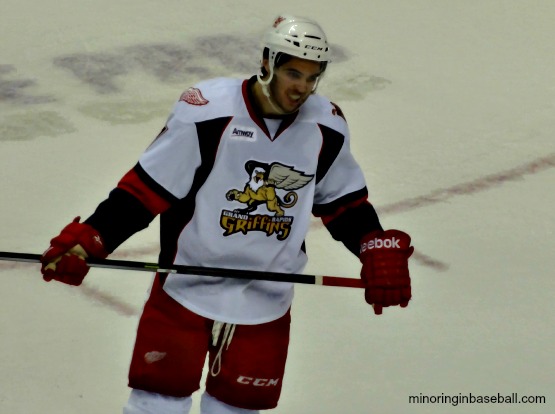 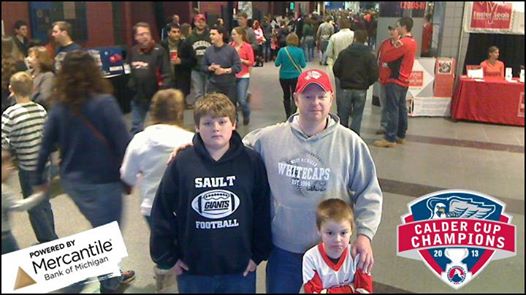 This one was taken at the kiosk on the Van Andel concourse.

This is just a quick post, as we’re getting ready to head south to the Grand Rapids area for Star Wars Night at the Whitecaps game tomorrow night. The fans in West Michigan have been pretty busy, as the ‘Caps have had plenty of promotions on the current home stand. On Wednesday, the 1998 Midwest Championship team was honored and the ‘Caps wore throwback jerseys of the ’90’s. Last night was special, not only because it was ’70’s night, but of the visitors to Fifth Third Ballpark. First, Benjamin Hill of MiLB.com was on hand doing his baseball thing. He gets involved in all aspects of the team, including the concessions, promotions, and between inning games. Ben is simply my hero, and you can check out all of his hi-jinks at Ben’s Biz Blog. Also attending last night game, were member of the AHL Champion Grand Rapids Griffins and the Calder Cup trophy. Area fans had the opportunity to get photos with coach Jeff Blashill, players, and the Cup. I really would’ve loved to have been at last night game to meet Ben and the Griffins. Tonight is also a special night, as Detroit Tiger legend Lou Whitaker will be there to sign autographs for fans. Being a second baseman, I idolized ‘Sweet’ Lou growing up here in Michigan. My Little League obligations have kept me in town, though, but we’ll be at Star Wars night tomorrow!

I’m taking a small break from minor league baseball to focus on some minor league hockey. Why would I do this, you ask? Easy, when my own Grand Rapids Griffins captured the Calder Cup last night with a 5-2 win over the Syracuse Crunch. The Calder Cup is awarded to the playoff champion of the American Hockey League, which is comparable to Triple-A in baseball. The Griffins won the series four game to two over the favored Syracuse team. Grand Rapids won the first three games of the series, but the Crunch battled back to win two and bring the series back home. It would have been nice to have won it on home ice at Van Andel Arena, but a championship is special no matter where it’s won. Griffin captain Jeff Hoggan accepted the Cup at center ice, and Tomas Tatar was awarded the Jack A. Butterfield Trophy as the series most valuable player, scoring 16 goals and 21 points in 24 games. In net, Petr Mrazek made 24 saves for the win. First year head coach Jeff Blashill made a fine showing also, and is a native of our little town of Sault Ste. Marie here in the U.P. This is the first championship in the 17 year history of the Griffins, and 27 years of pro hockey in Grand Rapids. 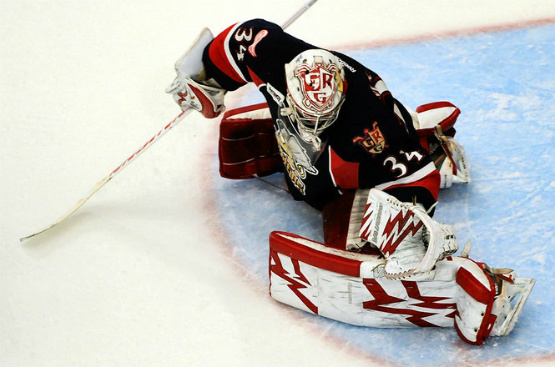 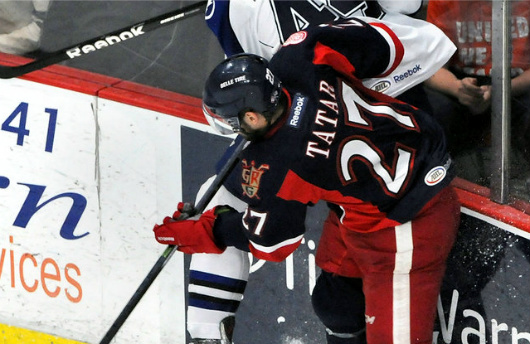 Tomas Tatar was named MVP of the Calder Cup Finals 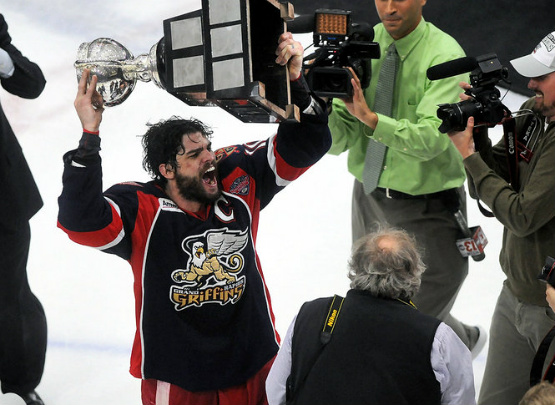 To celebrate, more than 4,000 fans were in attendance at Van Andel Arena this evening to see the Griffins and the Calder Cup. The team was also able to thank their fans. We knew this would be a special season when we saw them play in February, and they looked very solid. I would love to see the Whitecaps pick up on this, and have the Griffins honored at one of their games. They could even have a championship puck give away or something, or have the Calder Cup on display. Anyway, this is very good for my hometown of Grand Rapids. Congrats to the Griffins, and also to Syracuse on a great season.