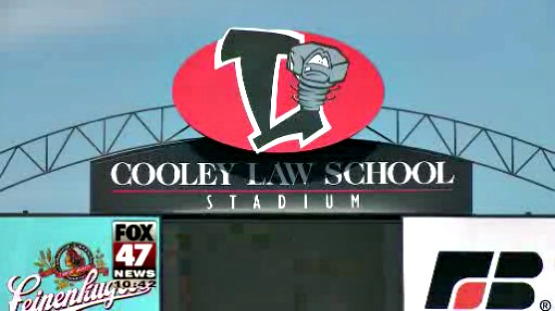 Although the Minor League Baseball season officially started tonight, the Lansing Lugnuts won’t play their first home game until next Thursday’s Crosstown Showdown against the Michigan State Spartans. I’m keeping my fingers crossed, as the weather reports don’t look good for next week, and I’m sure the kids will be disappointed if we don’t see the game. Since the Lugnuts released their 2013 roster, though, let’s take a look at some of the players we’ll be seeing. The team will have large shoes to fill, after last year’s squad enjoyed the most successful regular season in the franchise’s history, going 82-55. The entire coaching staff is back to lead its charges, including Midwest League Manager of the Year John Tamargo, Jr., pitching coach Vince Horsman, and hitting coach Kenny Graham.

This seasons’ version of the Lugnuts looks like it will be led by its pitching prospects. The 18-year-old Roberto Osuna is rated as the Toronto Blue Jays second highest prospect by Baseball America. The product of Los Mochis, Mexico, was signed by the Jays as a free agent. Also ranked as the sixth prospect in Toronto’s system is Daniel Norris. Norris is a 19-year-old who was the Jays second round pick in the 2011 draft. Joining them in the rotation will be lefty Alonzo Gonzalez, and right-handers Javier Avendano and Taylor Cole. The Lugnuts’ bullpen should consist of Wil Browning, Tucker Donahue, Chuck Ghysels, Arik Sikula, Ben White, and the only left-hander Griffin Murphey. Also in the bull will be former infielder Matt Johnson, who the organization turned into a pitching prospect.

The infield for Lansing will include returning players Balbino Fuenmayor, Shane Opitz, Gustavo Pierre, and Kellen Sweeney. They will be joined by Jorge Flores, Emilio Gurerro, and Christian Lopez, who is ranked at the 21st Jays prospect. The outfield features two returning players in Chris Hawkins (28) Dalton Pompey. The newcomers joining them are Ronnie Melendez and Carlos Ramirez. With nine returning players in all, the Lugnuts have a very good chance of challenging for the Midwest League Championship. I look forward to seeing these guys play next week at Cooley Law School Stadium in Lansing, and maybe with the Blue Jays in a few years.