With their 160th pick, the Tigers drafted Cam Gibson out of Michigan State.

The Detroit Tigers have drafted Cam Gibson in the 5th round with their 160th pick. Not really ground breaking news, other than the fact that Cam is the son of Tiger legend Kirk Gibson. Like his father before him, Cam is currently attending Michigan State University. Of course it’s unknown at this point if Cam, who just finished his junior season, will return to MSU or join the Tigers organization. As a junior, he had a career-best 10 doubles and 17 stolen bases. He hit .294 while hitting five home runs and posting 32 RBI’s. We had a chance to see Cam play back in 2013 when he was a member of the Battle Creek Bombers.

Drafting family members of current and former Tiger players and management is nothing new. In fact, Detroit just drafted RHP Ryan Castellanos in the 25th round (760 overall), who is brother to third baseman Nick Castallanos. Over the seasons we’ve seen the likes of Pat Leyland, Colin Kaline, Nick Avila, and Ben Verlander in West Michigan, all relatives to others in the Detroit organization (and I’m probably missing a few). Out of their top picks, though, I think that outfielder Christian Stewart and pitcher Tyler Alexander have the best shot at cracking the Whitecaps roster right out of the draft.

Cooley Law School Stadium-Lansing, MI: Last Thursday we gambled…and lost. As mother nature continued to punish us in Michigan with freezing rain, sleet, and snow, the 7th Annual Crosstown Showdown, pitting the Lansing Lugnuts against the Michigan State Spartans, has been postponed.  The Lugnuts announced that the game will be made up on May 1st, as a seven inning game. We won’t be able to make it to that one, but the Lansing ticket office staff was more than helpful in helping us exchange our tickets for a game that we will be able to make it back down for…weather permitting. The kids and I still had a fun day together, though. We took a tour of the State Capitol building that was very enjoyable and informative. Lily and Trevor have been studying government in school, and it’s good for them to actually see where and how it’s applied. Our love of cars also took us to see the R.E. Olds transportation museum. We love to see the old cars and memorabilia. So much pride and workmanship went into the classic vehicles. The most fun the kids had was at the Impression 5 Science Center. This is a hands on play area for kids to build, do experiments, and encounter science and nature first hand. They could have spent all day there, and we’ll probably visit this again after the Lugnuts game here in a couple of weeks. It does get you down a bit, waiting for the weather to clear up to see some baseball games, but we still had fun, and the kids were able to spend some quality time with their Papa for his birthday. We also had dinner at one of my favorite sports bars, the Nuthouse Sports Grill! 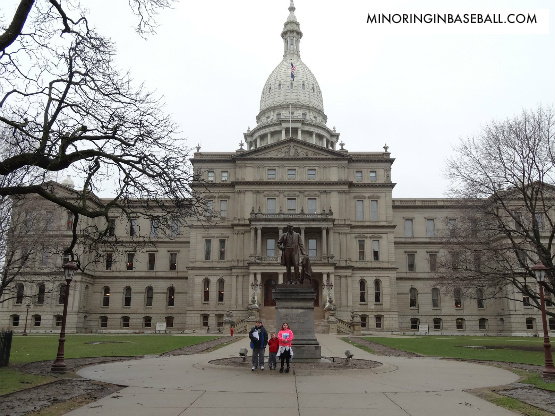 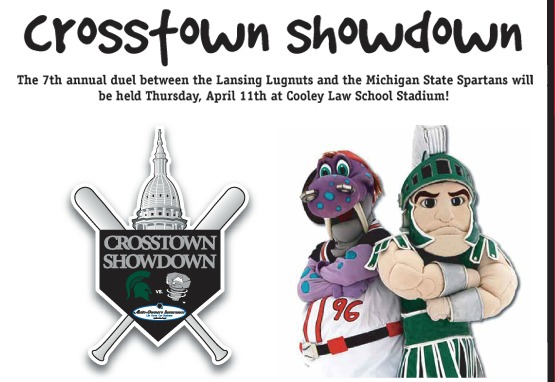 We all know how the song starts….’On a cold winter’s morning..’. And that’s exactly how it felt this morning when my alarm blared in my ear, telling me it was time to get up and get the kids ready for school. Despite being the first day of spring, ‘old man winter’  pounded us with another few inches of snow. Throw the high winds and cold with it, and it’s just another winter storm, complete with low visibility and icy roads. Spring has not sprung, and winter looks as if it wants to stay with us for a little longer. Today was also the day that single game tickets went on sale for the Lansing LugNuts. Here’s where the gambling part comes in.. Despite there being several feet of snow on the ground, and temperatures in the 20’s, I took a gamble and ordered tickets for the Crosstown Showdown on April 11th. I’m sure the grounds crew at Cooley Law School Stadium is working diligently to get the field ready  for game action, but there’s still no guarantee what the weather will be like and how cold it will be in just a few short weeks. If it was just me, I wouldn’t care too much, but I’m hoping it’s warm enough for the kids to sit through. I rolled the dice, however, so we’ll see what happens. The Crosstown Showdown is the LugNuts opening day exhibition game against the Michigan State University Spartans, based in East Lansing. According to the LugNuts, this is one of the most attended games every season, so I guess we were lucky to get tickets. Trevor is the one who really wanted to see this game, as he’s a Sparty backer, for some reason. It should be a fun day all around, too, as we plan on visiting the State Capitol building while down there, as well as a couple of museums. If I’m going to pull the kids out of school, I have to justify it somehow, right? It should be a good game to watch, also, as MSU is the defending Big Ten champions, and Lansing had a great season last year. So, in a few weeks we’ll pack up and head downstate…and hope that Mother Nature deals us a favorable hand.

Promotion courtesy of the Lansing LugNuts