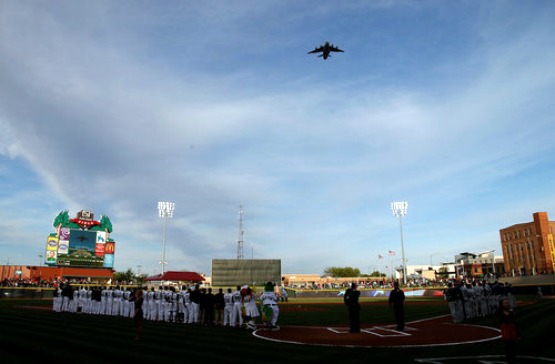 There was some optimism for this 2012 West Michigan team. And, in reality, there still is. With a solid number of prospects on the roster, as well as some familiar names for Tigers fans, this years rendition of the Whitecaps looks to have a winning look to it. Even infielder Colin Kaline feels confident about his team this season.

“I don’t see many weaknesses on this team,” Kaline told Steve Kaminski of MLive.com. “These are great guys, great team guys and great ball players. I think the team has some pretty high expectations for moving on this summer. We have a lot of guys who have been around a bit, with a mixture of young talent. It’s going to be really special to be a part of this team this summer.”

The Whitecaps hit a speed bump on Opening Day, however, in the form of Dayton Dragons pitcher Justice French, who was named the Cincinnati Reds‘ Minor League Pitcher of the Year last season. French struck out eight hitters and only allowed two of the Whitecaps four hits to earn the 3-0 victory. In all, the ‘Caps struck out eleven times and were 0-5 with runners in scoring position. Aaron Westlake, Dan Green, Eugenio Suarez and Steven Moya collected hits for West Michigan, while Kaline went 0-3. Starting pitcher Josue Carreno took the loss for the ‘Caps, who are now 11-8 all time on opening day.

First baseman Aaron Westlake had one of the Whitecaps four hits on Opening Day.

As much as we all want our team to win the season opener it is just one game. I’m sure the Caps will recover and have a great season. On the other end of the spectrum, congrats to the Tigers. Wow, Verlander is a beast. Too bad about the blown save (hey, statistically Valverde’s streak could only last so long) but never getting the win on Opening Day despite his dominance will be one of those neat colorful pieces of trivia about Verlander later.
— Kristen

Well, the ‘Caps are now 0-2, but I hope they at least win next week while we’re there! Yeah, Verlander was amazing, but the team got the win and Valverde will be fine, I’m sure. Last I checked, the Angels were up 5-0 on the Royals, so congrats to them!
–Mike

Good recap of the game and positive team outlook despite a small step backwards Game No. 1. This team looks to have plenty of talent to have a great summer. A solid roster that should entertain fans and challenge the organization’s development.

Looks fun! I shall be attending a bulls game soon in durham… most excited. I have never been… i will take snazzy pictures.

:You should have a good time at the Bulls game. I’m hoping to get there soon on one of my trips. You can’t throw a pepple in NC without hitting a minor league team, it seems. Can’t wait to see your pics!!!
–Mike

Stinks that they lost…. Bisons lost opener too, but are now 2-1. Hope the ‘Caps turn things around.
-Quinn from nybisons
http://www.nybisons.mlblogs.com

Thanks Quinn! The ‘Caps won last night in 11, so are now 1-2. They’re home opener is tomarrow, so maybe that will help their luck. Good luck to the Bisons.
–Mike

Thanks for the luck. The Bisons won again today and are now 3-1. Hope the WhiteCaps win in there home opener.
-Quinn from nybisons
http://www.nybisons.mlblogs.com

Colin Kaline… man those Kalines sure do know how to name their children!
–Jeff

Hopefully one day they’ll say that about Lily, Trevor, or Brain!
–Mike