Smokies Stadium-Kodak, TN:  This year Brian, Papa, and I decided to kick off the 2019 Minor League season in the Smoky Mountains for opening day.  We were staying at the tourist trap this is Gatlinburg, so it wasn’t much of a drive up to the quaint little town of Kodak, Tennessee.

This was our first trip to Smokies Stadium, and it was definitely one I’m glad we were able to come to.  The ballpark has some nice sightlines and scenery in the outfield.  And, of course, Brian had to get a pic with the Smokies mascot, Homer! 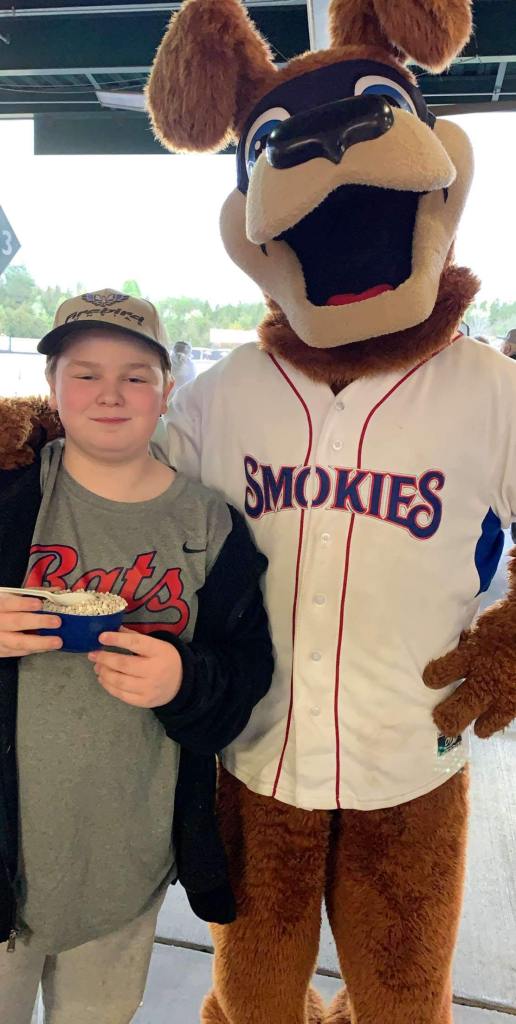 As for the game, it was a back-and-forth thriller.  Robel Garcia led the way for the Smokies on offence. He went 3-5 with 2 RBI’s.  Jared Young also added an RBI, scored two runs, and went 2-5.  On the mound, Wyatt Short earned the victory for Tennessee while Craig Brooks earned the save.

This was a great way to kick off our minor league season,  It was a fun game to watch with great company and great weather.  Would very much recommend a game here, and we’ll try to get in another game next time we’re in the area.

Opening Day of the 2012 baseball season is finally here in West Michigan. A lot more goes into this event, and every other game for that matter, than the coaches strategies and the players batting practice. The grounds crew, vendors, and maintenance workers are tirelessly getting Fifth Third  Ballpark ready for the thousands of fans. This Miller Lite‘s for you….for all the workers who make it possible for us fans to enjoy the ballpark experience. We can’t make it tonight, but the kids and I will be there on Wednesday! The Whitecaps are 1-2 on the young season, beating Dayton Saturday night in 11 innings.

There was some optimism for this 2012 West Michigan team. And, in reality, there still is. With a solid number of prospects on the roster, as well as some familiar names for Tigers fans, this years rendition of the Whitecaps looks to have a winning look to it. Even infielder Colin Kaline feels confident about his team this season.

“I don’t see many weaknesses on this team,” Kaline told Steve Kaminski of MLive.com. “These are great guys, great team guys and great ball players. I think the team has some pretty high expectations for moving on this summer. We have a lot of guys who have been around a bit, with a mixture of young talent. It’s going to be really special to be a part of this team this summer.” 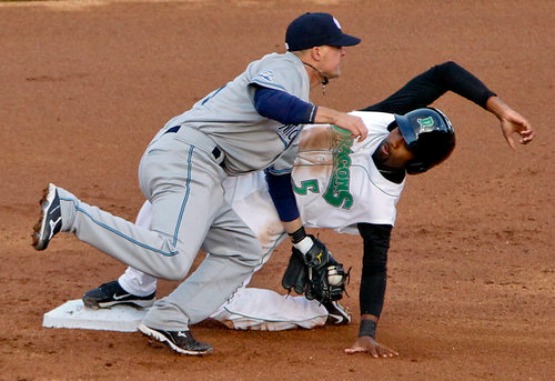 The Whitecaps hit a speed bump on Opening Day, however, in the form of Dayton Dragons pitcher Justice French, who was named the Cincinnati Reds‘ Minor League Pitcher of the Year last season. French struck out eight hitters and only allowed two of the Whitecaps four hits to earn the 3-0 victory. In all, the ‘Caps struck out eleven times and were 0-5 with runners in scoring position. Aaron Westlake, Dan Green, Eugenio Suarez and Steven Moya collected hits for West Michigan, while Kaline went 0-3. Starting pitcher Josue Carreno took the loss for the ‘Caps, who are now 11-8 all time on opening day.

First baseman Aaron Westlake had one of the Whitecaps four hits on Opening Day. 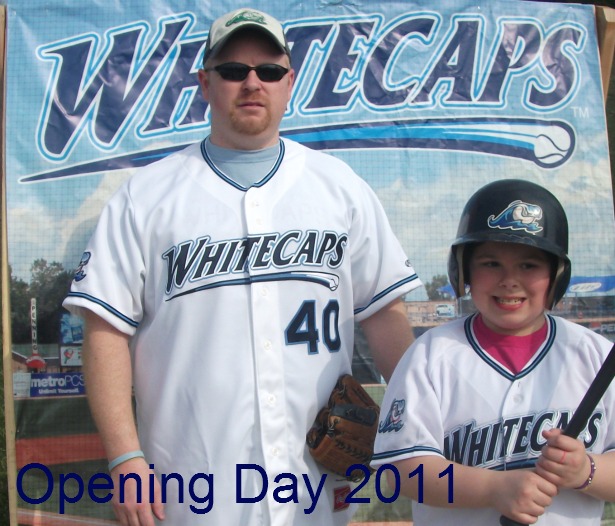 Heading downstate, I wasn’t very optimistic about this game actually taking place, as all the weather reports called for thunder storms. The baseball gods must have felt generous, though, and after the first three games of the season were postponed from Lansing, the Whitecaps and Lugnuts were finally able to kick the season off in Comstock Park. The sun was shining as I packed the kids kid in the car. The boys stayed back at my sisters due to illness, so I got to spend the day at the ball park with my favorite girl (my daughter, not Avril Lavigne). The weather was sunny as we played catch in the parking lot before the gates opened at 11:00 a.m. When we were finally let into the ball park our sences were overloaded with the smells of popcorn, hot dogs, and freshly cut grass as we recieved out free hats and found our seats. Lily played at the park for a bit before we got in line for autographs on the field at 12:15 p.m. They only allowed about fifteen minutes on the field, so we had to hustle to get her baseball and cards signed. Lily did get to meet the Tigers number two prospect Nick Castellanos and former Major Leaguers Ben Oglivie and Ernie Young. The rest of the day was perfect for baseball, topping low 80’s (a record high for the ‘Caps openers) with a nice breeze for us to enjoy the action.

The game itself was a real pitchers duel, with the Whitecaps winning 13-12 with a walk-off hit in the ninth. Trailing 12-7, they scored the last six runs of the game for the win. West Michigan battled back with a seventh inning two-run homer by Luis Castillo, and a three-run shot by James Robbins to even the score in inning eight. In the ninth inning, Dixon Machado stole second and scored the winning run on a two-out base hit by Rob Brantly. Machado was 4-5 on the day with a stolen base and three runs scored. Brantley went 2-4 with the home run and a two-run double. Bruce Rondon came on in the ninth to close the door and earn the win.

I simply can’t wait for the next ball game we can make it too. Just another month until our trip in May, which will include a Whitecaps game, too. 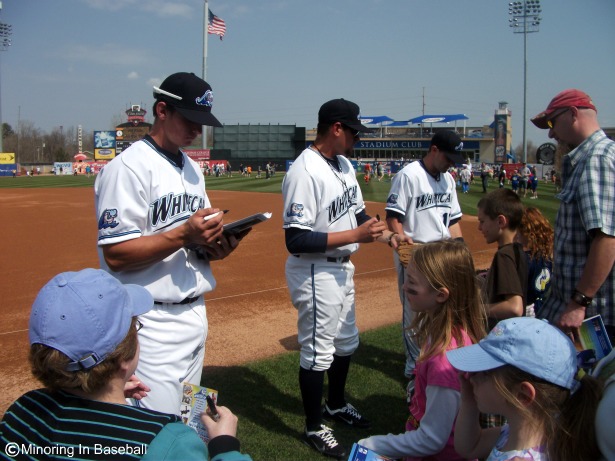 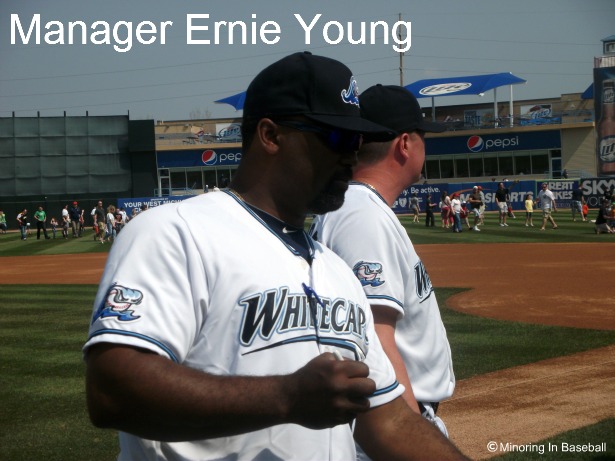 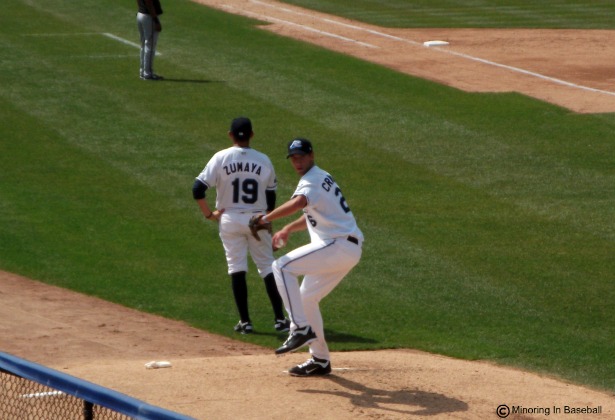 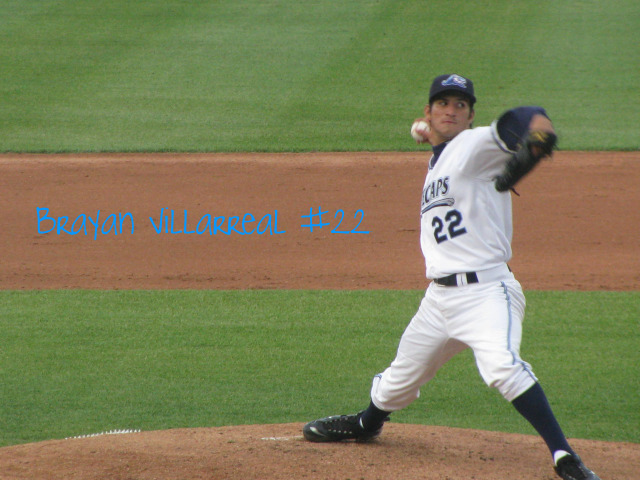 A suprise out of this seasons Tigers spring training camp was pitcher Brayan Villarreal. The hard throwing right-hander was thrilled yesterday to find he made Detroits 25-man roster. After hearing the good news, the 23 year old from Venezuela immediately called his parents.

“This is the moment I’ve been waiting for for a long time,” Villarreal stated. “It feels really, really good. I can’t say how good I feel. My mom and dad were just so happy. They said ‘You deserve it; you worked hard. I am proud’.”

Villarreal pitched in five games for the Tigers this spring, earning one save, striking out four, and had a 5.06 ERA. I was able to see him pitch against the Peoria Chiefs back in 2009 while he was with the Whitecaps. In that outing he pitched five scoreless innings and had a measely 1.06 ERA at the time.

Also making the cut on Saturday are outfielders Casper Wells and Brennan Boesch. Niether player made last years team out of spring training, but did well when they were called up.

“This is tremendous,” Wells said. “It’s a stepping stone to what I hope to accomplish. And it’s really nice to break camp with the team. I grew up following the Yankees, and went to games at old Yankee Stadium. This will be my first time at the new Yankee Stadium, and I can’t wait.”

In 36 games last season, Wells batted .323 and manager Jim Leyland stated he had the second best outfield glove on the team behind Austin Jackson. Boesch batted .256 last season, and led all American League rookies with 14 home runs and 67 RBI’s.

Boesch stated, “It’s the first time breaking camp with the team and that’s cool. It’s and honor and everything. But I fully expected to be here. I did a few things last year, but I also know competition is good for the organization, and I never have a problem with competing.”

These players join former Whitecaps Alex Avila, Brandon Inge, Joel Zumaya, Ramon Santiago, Don Kelly, Ryan Raburn, and Will Rhymes (who won out the second base job) on Detroit’s Opening Day roster. That’s a pretty impressive list of former ‘Caps. Good luck to all these guys, as there success should be wins for the Tigers.

These are some great pics from the West Michigan Whitecaps’ Opening Day at Fifth Third Ballpark in Comstock Park, Michigan. The ‘Caps started the season on the road, going 0-3 before picking up their first win in the home opener. They are now 3-4 on the season after taking 2 of 3 from the Fort Wayne TinCaps and beating the Bowling Green Hot Rods in Kentucky in the first meeting ever of the two clubs. I’d love to take credit for these, or at least say that I was there, but I’ll have to wait another two weeks for my first live game. Looking at the pics makes me itchy to hit the road early. Enjoy.

The 2010 West Michigan Whitecaps roster is all but set when they take the field Thursday in Eastlake, Ohio to take on the Lake County Captians kicking off the Midwest League season. This season’s roster includes five teen-agers including the Tigers number one 2009 draft pick, 18-year old Jacob Turner. Pitchers Giovanni Soto(18) and Melvin Mercedes(19), infielder Hernan Perez(19), and outfielder Avisail Garcia(18) round out the ‘brat pack’.

“We’re very young, but I like the talent we have, especially Turner, who has great stuff”, Whitecaps manager Joe DePastino told the Grand Rapids Press.

Turner is pictured here signing for a young fan. This year’s roster will also include eleven players from last years squad that finished 81-59 and made the playoffs. After the three game series with Lake County, the ‘Caps will face the defending MWL Champion Fort Wayne TinCaps in their home opener at Fifth-Thrid Ballpark on April 11. The full West Michigan roster can be found HERE.

MLive.com is featuring two really good articles on Scott Sizemore. The first one discusses his background and progress at second base. The second one has to do with his friendship with fellow Tigers rookie Austin Jackson. Both are worth checking out. 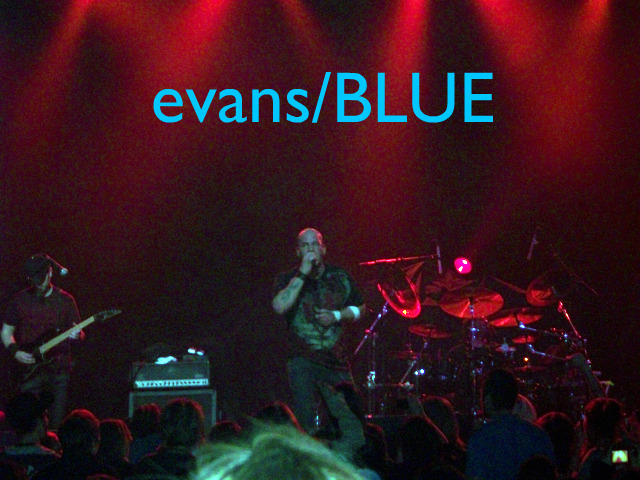 The band Evans Blue will be kicking off the Detroit Tigers home-opening pre-game party on April 9. The Toronto based rockers will be playing at the Hockeytown Cafe accross from Comerica Park from 3:30-6:00 pm. My wife and I recently saw them in concert, and it’s really a show worth going too. They were one of four bands opening for Pop Evil, but Evans Blue’s performance was difficult to beat. I highly recommend see these guys as the music is heavy and intense. I know they’ve just scheduled some more tour dates. We were lucky enough to hang out with some of the band members after the show, and my wife got a CD signed by them. The top pics are of Evans Blue, and the below is my better half and I after the show. Yeah, I had a few…sue me… 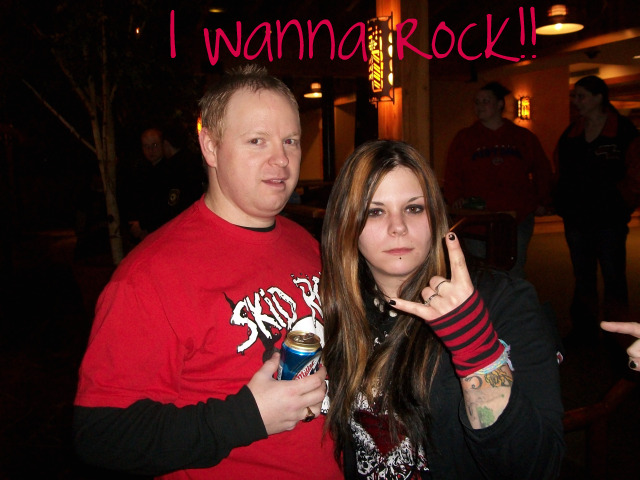