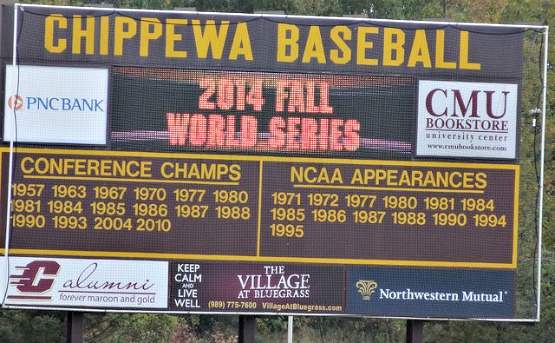 Theunissen Stadium-Mount Pleasant, MI: We’ve had so much rain here in Michigan this past month, we were very lucky that we caught a break last weekend, and actually enjoyed some fall baseball. The Central Michigan University Chippewas play a split-squad Fall World Series, and we were able to see game five. It was a beautiful day, and with the sun shining down, it seemed a lot warmer than the 65 degree temperature. We usually go to football games this time of year, but the Chips were out of town, and I prefer baseball, anyway.

We each picked teams, with Lily and I taking Team Gold (white uniforms), and Brian and my Dad siding with Team Maroon. Good choice for us, as Gold put three runs across in the first inning. Maroon pitcher Adam Aldred gave up four runs and struck out five in four plus innings. On the other side, Gordon Grasjean was great on the hill, and no-hit the Maroon squad through five innings. He ended up giving up one run on four hits, and struck out two batters in his seven innings of work. Offensively, Adam Collins led the way for the Gold, with two hits and two RBI’s, and Tyler Huntley also added an RBI. For Team Maroon, Logan Regnier’s triple in the seventh accounted for his teams lone run. 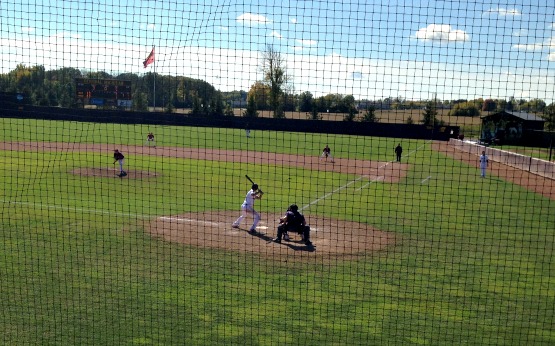 Any extra baseball we get in is a plus, and this was a fun and perfect day for it. Very blessed and lucky to be able to spend this time with family watching a game. I’m not looking forward to winter at all, and April can’t come soon enough! Final: Team Gold 6, Team Maroon 1.