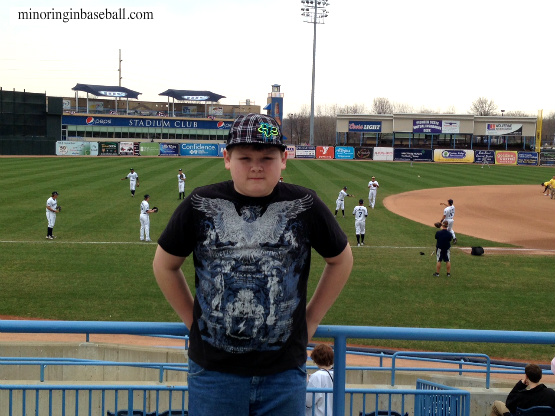 Fifth Third Ballpark-Comstock Park, MI: Well, this was our first ballgame of the season, and the Michigan weather treated us about as well as can be expected. I want to make a statement, too, that I loathe the Weather Channel. They are complete liars, and I will never trust them again. Never. Despite what mother nature through at us, though, we had a fun time together at the Whitecaps game, and I still was happy just to be watching live baseball. The kids had a fun time, and the game was part of their Papa’s birthday present. I was still impressed at how good Fifth Third Ballpark looked after the fire in January, too. They did a good job of rebuilding it and getting it ready for the season. We settled in and grabbed some hot dogs and pop for the kids, and a beer for my dad and I. The boys and I went down to the field level to watch pitching coach Mike Henneman work with some of the staff, and see some of the warm-ups. The game was off to a good pace with lots of action early on. I really like how Andrew Graham is working this team; lots of movement on the base paths, bunting, and smart baseball. Lily took Brian to the park for a short time, and he was able to meet the new mascot, Roxy, a female River Rascal. The rain hit us about the third inning, but we toughed it out until the tarp came out after the top of the fifth.

Brian happy to be back at the ballpark! 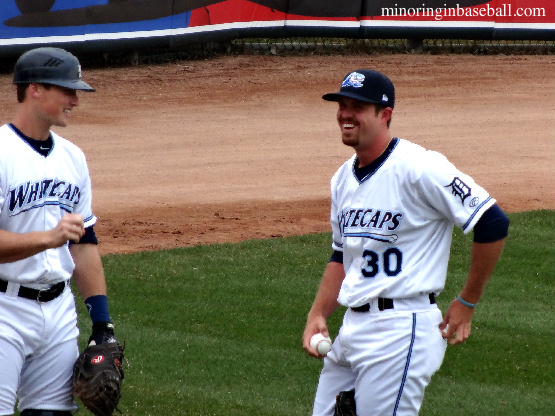 The ballpark looks good after the January fire. 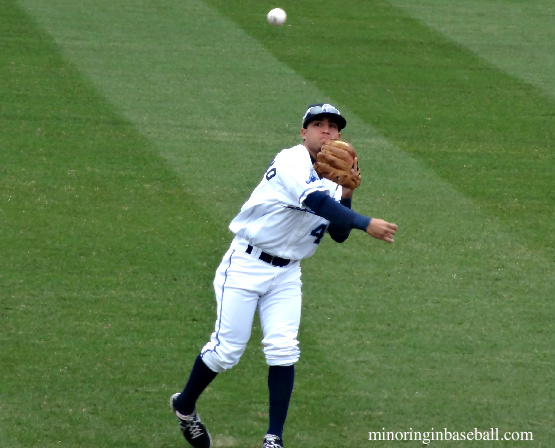 The game was a good one for the Whitecaps, as they produced four runs before the delay, and four after for the win. The ‘Caps racked up a season high 15 hits to go along with the season high of eight runs. Raph Rhymes led the way offensively, going 3-5 with two RBI. He was helped out by both Brett Harrison and Wynton Bernard who were each 3-4. Javier Betencourt was 2-4 with and RBI, and Ben Verlander was 2-5 to pitch in, also. On the mound, Buck Farmer earned the win, only giving up one run, striking out six, and issuing one walk. He pitched himself out of trouble at times, leaving the bases loaded in the first inning, and eight Snappers runners on base. Montreal Robertson and Will LaMarche kept Beloit in check the rest of the game. A good outing, and good work by this team all around. It will be interesting to see which players make the All-Star squad here in June, as there are a handful of candidates so far in the early going. We had planned on maybe hitting a Great Lakes Loons game, also, while down state, but the Weather Channel stated it would be raining all day (they ended up playing a double-header on a beautiful day…). We’ll see the Whitecaps again early next month down in Lansing as they take on the Lugnuts. Final Score: Whitecaps 8, Snappers 1. 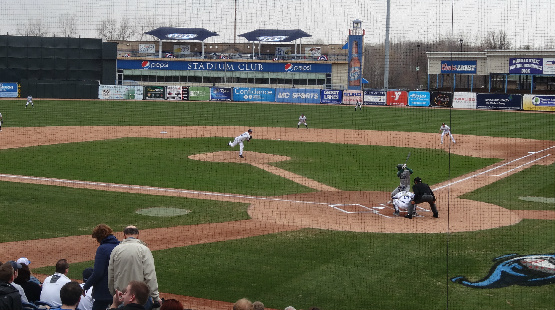 A selfie with Brian

And the tarp comes on the field: 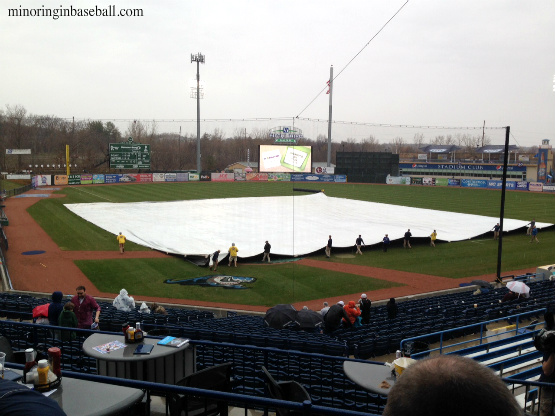 All photos and video property of Minoring In Baseball

I’m not going to over analyze the Prince Fielder signing by the Tigers any more than it has been. The papers, web sites, and talk shows have already done that to death. Some experts have the Tigers winning the Series, others have them flopping this season. Whatever. They’ll play their games this summer, and whatever happens, happens. Am I excited about the upcoming season? Of course, I am. But no more than I am or would be for any other baseball season. The reason for this post is to simply drive home the point I’ve been trying to make for the last three years I’ve been on MLBlogs…get to your local Minor League ballpark. The fact is, you really don’t know what future star you’ll be seeing. You never really know what player you might see that will play on your favorite team one day. Personally, it’s fun for me to watch MLB games on TV and say “I saw this guy play in Toledo”, or “Savannah”, oh, well, Hell…pick one. Here are some pics of Prince playing for the Beloit Snappers as a mere 18-year-old, in front of probably mostly Tiger fans at Fifth Third Ballpark. I also read that daddy Cecil was in a suite watching his son play, too. Most fans probably thought that the future Tigers would be wearing the Whitecaps uniforms. Who knew?? 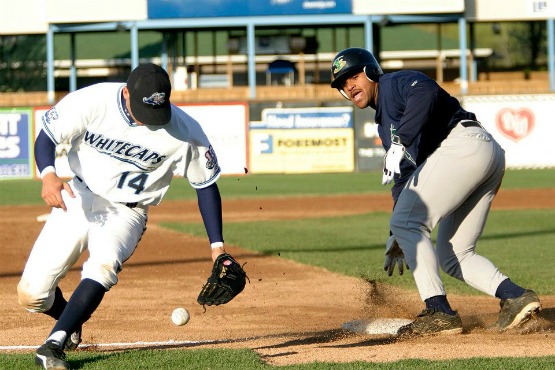 West Michigan Whitecaps vs. Beloit Snappers: As we were rained out last night, the weather was on our side tonight. A beautifull night in Grand Rapids, to enjoy some baseaball. Of course, Star Wars night brought out over 10,000 fans to Fifth Third Ballpark for the game and to see their favorite characters. Yes, the two loves of my childhood colided in one special night with my kids. Baseball fans and Star Wars nerds fans alike were cheering in unison. The Whitecaps even wore special Star Wars jerseys with the likeness of Darth Vader on them. I think that Lily and Trevor were more excited over meeting the characters than the game, but at least they got to see everyone they wanted. Trevor’s favoites are the Stormtroopers and Lily liked meeting Chewbacca. The kids also got autographs from some of the Whitecaps players like third baseman Wade Gaynor and hitting coach Louis Quinnones who played with the Giants, Reds, and Cubs. The game was capped off with a fireworks display. Of course the kids had to watch the Star Wars movies on the way home (no prequals), and are now hounding me to play with my 30 year old toys. Oh well, they can’t last forever, but the memories of this ballgame can. Final: Whitecaps 4, Snappers 6. 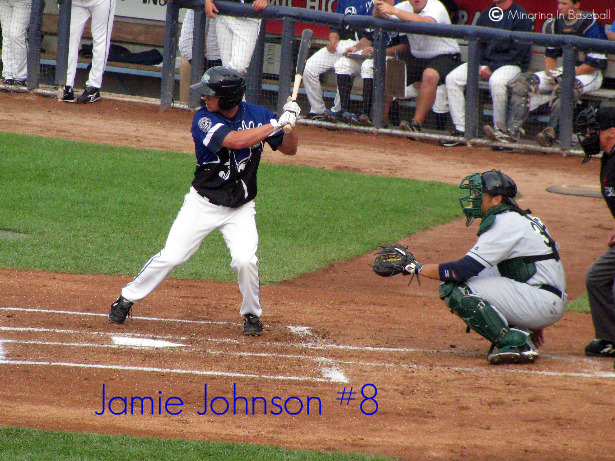 Clinton LumberKings vs. Beloit Snappers: After leaving Norway, we headed back east to the banks of the Mississippi River once again. This time our destination was Alliant Energy Field, home of the Clinton LumberKings who we saw the night before in Peoria. Alliant Energy Field was built in 1937, and is a great throwback to the older Minor League parks. Remodeled in 2006, this is really a nice place to watch a ball game. The grandstand is completely covered, and the seats put you right on the field. The fans were friendly and very baseball knowledgable. We ate dinner at  the ballpark, had a cold beer, and watched a good baseball game in the oldest city currently in the Midwest League. I like to think of this ballpark as ‘classic’ instead of old, and despite it being not as fancy as some of the other parks we’ve been too, I really enjoyed myself here. Final: Snapper 2, LumberKings 0. Best: The trash pail: for only $5:50 you get loads of food including mini tacos, mini corndogs, onion rings, waffle fries, chicken tenders and more. Worst: Finding the ballpark. GPS couldn’t find it, and there are absolutely no signs anywhere in town to direct you there. My advise is to follow the riverfront until you run into it. 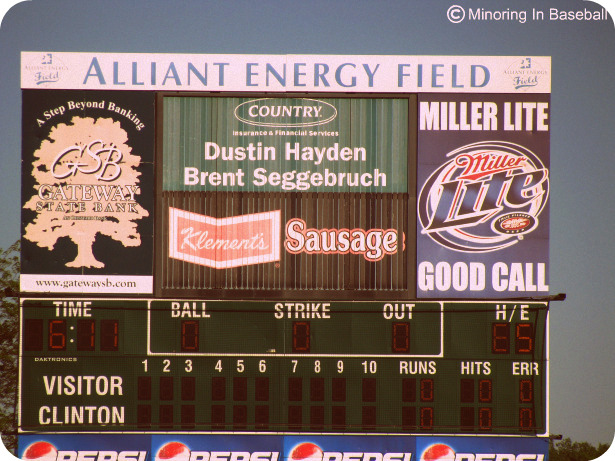 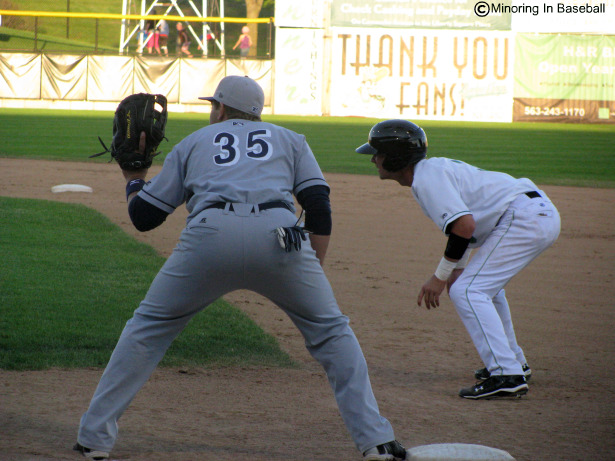 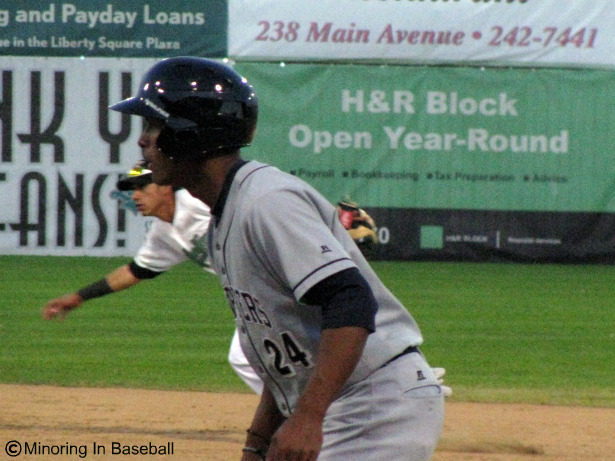 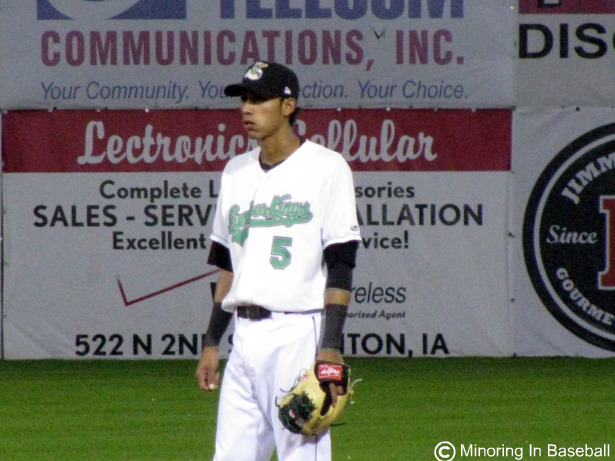 If you’re looking for the most modern and technological ballpark, then Pohlman Field isn’t for you. In fact it’s not even a stadium, but actually just a field. It looks like any field in a residential area across the country with a fence around. I do, however, recommend this ballpark. It’s simplicity screams old-fashioned baseball and the fans who are diehards make it a trip worth taking.

As I stated before, the park is located in a residential area. I believe it is also community owned and ran. The parking was free, but there was on a handful of parking spaces, which makes me believe most of the fans probably walk to the game from their homes in the neighborhood. Both the souvenir shop and the concession stand are located beneath the grand stand. The shop wasn’t real big, but had a decent selection of memorabilia. They put another concession stand on a porch down the right field side, which is really nice and has a good selection of food. On the left field side, they built the Hooters Party Deck where you can watch the game, eat and drink for one low price. Unfortunately, no Hooters girls were present, or that’s probably where I would have spent most of my time. Most of the seating was metal benches, so not real comfortable. Some stadium seat are right behind home plate, but not a great view of the action from there.

The fans, like many from Wisconsin, were all very nice. The Whitecaps had beat the Snappers for the 2007 Midwest League title, so I wasn’t sure how I’d be received with my ‘Caps jacket and hat, and so one. No one really cared, and were very welcoming. We had the pleasure of meeting ‘Kaptain K’, who is a diehard fan that sits behind the Snappers dugout and puts the ‘K’ signs up for strikeouts. He showed us around the park and let us know what prospects to look out for. He was a great ambassador for his team and a class act. They had some other colorful fans, like the bug guy with the tuba, and the older lady and her cow bell.

My trip there in 2008 was a truly unique experience that I’ll never forget. Pohlman Field is a throw back to the older days of baseball that any baseball fan would really enjoy.

The ballpark was built-in 1982, and also hosts the local high school and American Legion teams.