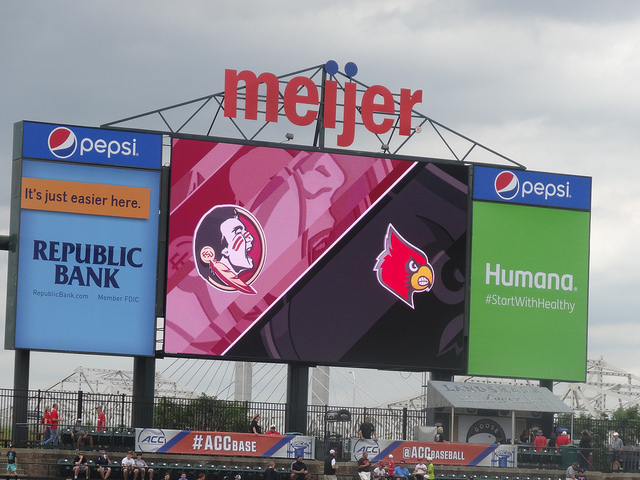 Louisville Slugger Field-Louisville, KY:  I didn’t like this game.  Not at all.  In some way of dark magic, Florida State’s season came alive the weekend before when they rode into town and spanked the Cardinals two games in a row on their home field.  One would think that this game would be different, that Louisville would be pumped up and out for revenge.  Unfortunately for the packed house clothed in red and white here in the stands at Slugger field, the opposite happened.  The Cards seemed to play some uninspired baseball, en route to eliminating themselves from the tournament.

From here forward, I’ve decided not to mention any Seminole player by named during the re-caps.  Sorry, it’s nothing personal.  Well, yeah, actually I guess it is…  Kade McClure was on the mound for the Cards, and he gave up two runs in the first inning.  He only lasted 3.24 innings, giving up four runs on six hits.  Adam Wolf and Lincoln Henzman each gave up a run, also.   The Cards had little offense, but Brendan McKay did go 2/4 with a home run.  FINAL: Cardinals 2, Seminoles 6.